However, they differed on the details, with Obama saying the current crisis was “the final verdict of eight years of failed economic policies by [President George] Bush and McCain”.

On Iraq both candidates sparred over Iraq, with McCain acknowledging that the 2003 war was “mishandled” but that the surge had been a success and that Obama was “refusing” to acknowledge its success.

“We will see a stable ally in the region and a fledgling democracy,” he said.

However, Obama countered that McCain was trying to rewrite the war’s history.

On Pakistan and Afghanistan, McCain criticised Obama for his previous assertion that he would attack al-Qaeda and Taliban targets in Pakistan, saying such threats were unhelpful.

But Obama said that if the US had al-Qaeda, or its leader, Osama bin Laden, “in our sights” and if Pakistan was unwilling or unable to act “then we should take them out.”

The candidates reserved some of their toughest exchanges on Iran, with McCain condemning Obama for saying he would meet with leaders of nations opposed to the US,

“Obama will sit without precondition with Ahmadinejad, Chavez, Castro [and] legalise their behaviour,” he said

“I’ll sit down with anybody, but there has to be preconditions.”

Obama countered that he “will meet with anybody at my place and time of choosing if it is in the interests of America”.

Both Obama and McCain agreed that Georgia and Ukraine should be allowed to join the Nato alliance – opposed by Russia – and Obama said they should be given an immediate plan for membership.

McCain described the nation has being “KGB apparatchik-run” and said Obama revealed naivety in Russia’s conflict with Georgia in South Ossetia, while Obama said he wanted Russia to behave “within the norms of international behaviour”.

The Israeli-Palestinian conflict did not figure even once in the debate.

Al Jazeera’s Rob Reynolds in Oxford, Mississippi, said that there were no surprises in the debate, although there was a marked frostiness between the two men, with Jim Lehrer, the moderator, often failing to get the two men to address each other directly.

“They were sticking to their talking points that we have heard many times before. There were no zingers, no punchy lines, no quips or put-downs that stick in the memory … all in all it was a fairly tepid affair,” he said.

“If you had asked most political reporters in this countrya year ago what was the top issue in this political campaign would have been they probably would have said Iraq, but that was before the economy started to really deteriorate and, of course, the economy has become issue number one.

McCain had earlier called for the debate, the first of three to be held before the November 4 presidential election, to be suspended while the US government worked on a $700bn bail-out plan for the current financial turmoil.

However, on Friday McCain’s campaign said he felt “significant progress” had been made on the deal and he would attend the debate.

McCain’s call to halt the debate was criticised by Obama as “injecting presidential politics into delicate negotiations”.

However, McCain’s campaign said the decision to temporarily suspend his campaign had been made “in the hopes that politics could be set aside to address our economic crisis” and condemned the Democrats for playing the “blame game”. 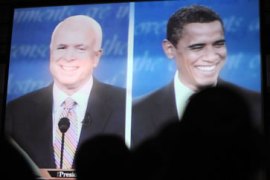 World reaction to the US debate

Al Jazeera’s speaks to analysts from Pakistan, Russia, China and the Middle East. 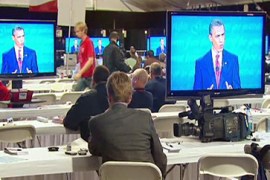 Video: PR campaign on after debate

As US presidential candidates sparred, party workers sought to sell their messages behind the scenes. 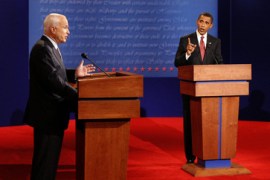 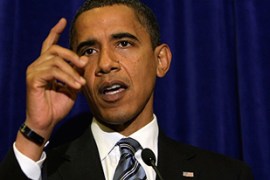