“With insufficient liquidity to meet its obligations, WaMu was in an unsafe and unsound condition to transact business,” the OTS said.

In a deal announced late on Thursday, JP Morgan Chase bought the bank, the second time in six months the firm has taken over a major financial institution paralysed by bad mortgage debts.

Stella Blair, chairman of the FDIC, offered assurances that all customers of Washington Mutual, which billed itself as the “bank for everyday people, focusing on middle-market consumers and small businesses,” would be protected.

“For all depositors and other customers of Washington Mutual Bank, this is simply a combination of two banks,” Blair said of the deal with JP Morgan Chase.

“For bank customers, it will be a seamless transition. There will be no interruption in services and bank customers should expect business as usual come Friday morning.”

The purchase of Washington Mutual which had about $188bn in deposits, creates the largest US depository institution with more than $900bn in customer deposits, JPMorgan Chase said.

“Our people have worked hard to build a strong franchise and balance sheet – making this compelling transaction possible,” Jamie Dimon, chairman of JPMorgan Chase, said in a statement.

Earlier this year, the banking giant also took over Bear Stearns, which had been one of the most high-profile victims of the US subprime property crisis.

The US government has been trying to tackle the crisis with a proposed $700bn bail-out plan to buy up bad debt, but the plan has been stalled by disagreement over its terms and the interjection of presidential campaign politics.

Even as congress struggled to agree the plan, John McCain, the Republican presidential candidate, endorsed a new Republican plan that differs markedly from the one that had been under deliberation, prompting Democrats to accuse him of sabotaging the deal.

The crisis has affected institutions around the world.

In Europe on Friday, Dutch-Belgium bank and insurer Fortis announced plans to sell additional assets to improve its solvency, in an attempt to reassure customers and investors.

HSBC, the largest European bank, announced it was cutting 1,100 jobs worldwide, “in the light of the current global business and economic environment”.

Five hundred of those jobs were to be cut in Britain. 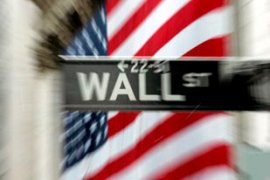