A senior McCain adviser made clear McCain would not attend a Friday debate unless a congressional rescue deal was sealed.

Beaten to the punch

And McCain urged Obama to push back their television debate on foreign policy in order to concentrate on solving the economic mess.

“We must meet as Americans, not as Democrats or Republicans, and we must meet until this crisis is resolved,” he said.

But Obama stressed at a news conference later that he had called McCain first to propose that they issue a joint statement in support of a package to help fix the economy as soon as possible.

He said McCain called back several hours later, as Obama was leaving a rally in Florida, and agreed to the idea of a statement but also said he wanted to postpone the debate and hold joint meetings in Washington.

“When I got back to the hotel, he had gone on television to announce what he was going to do,” Obama said.

The two candidates did later issue a joint statement urging legislators to co-operate and reach a bail-out agreement to avoid “economic catastrophe”.

“This is a time to rise above politics for the good of the country,” it said. “We cannot risk an economic catastrophe. Now is our chance to come together to prove that Washington is once again capable of leading this country.”

Obama said separately that both he and McCain agreed that the bail-out must be passed without any other measures attached.

George Bush, the president, invited both candidates, along with the leaders of the House of Representatives and the senate, to the White House on Thursday to try to get support for the bail-out plan.

An Obama spokesman said the senator would attend the meeting but the Democratic candidate rejected the call for the debate to be pushed back.

“It’s my belief that this is exactly the time when the American people need to hear from the person who in approximately 40 days will be responsible for dealing with this mess,” he said.

“And I think it is going to be part of the president’s job to deal with more than one thing at once.”

The rescue plan proposed by the Bush administration is coming under heavy attack from legislators from both parties and Americans are sceptical about bailing out Wall Street with a plan that costs more than the US has sunk into the Iraq war.

The $700bn proposal would have the US treasury buy up bad mortgage-related debts from financial institutions, including US subsidiaries of foreign banks, to try to stem the financial storm.

But many legislators are angry that it will provide a lifeline to Wall Street when homeowners and ordinary Americans are suffering.

Rob Reynolds, Al Jazeera’s senior Washington correspondent, said the candidates sense political danger over the financial package, either in going against widespread public anger over the current turmoil, or in being the one to not back a deal and then watch markets slump further.

McCain’s moves come at a time when Americans have been telling pollsters they believe Obama would handle the economy better than the Republican, with the latest poll by ABC News and The Washington Post showing a nine-point lead for Obama.

“He capitalised on this very nicely. He’s put Obama in a box – had Obama joined him he would have been subordinated, but instead he runs away,” he said.

“I think it was a political masterstroke by McCain. McCain is down in the polls, at this point he’s the challenger … he had to make a bold move and today he did just that. Obama is now really in a box. I don’t know where he goes from here.”

But Steven Livingston, professor of political communication at George Washington University in Washington DC, said refusing to take part in the debate was a high-risk move from McCain.

If he insisted on not showing up for the debate on Friday, some of Obama’s advisers would make the connection between a “missing McCain” and a missing Bush during a time of crisis, Livingston said.

Bush had been heavily criticised for being “missing” when Hurricane Katrina hit New Orleans in 2005, causing severe damage and claiming many lives.

Democrats called for the debate to proceed and said McCain was trying to score political points.

Barney Frank, the Democratic chairman of the house committee shepherding the bail-out plan, said all sides were getting close to a deal and accused McCain of “trying to take credit for something that’s already happening without him”.

Harry Reid, the Democratic senate majority leader, told McCain in a phone call that “we need leadership; not a campaign photo op”.

While McCain said he would “suspend” his campaign, including advertising and fundraising, it will simply move to Washington where the four-term senator will remain in the spotlight.

But McCain denied political motivations, telling CBS News that “I don’t think, at this time, that we can worry much about politics”.

The US Commission on Presidential Debates said it would hold the debate on Friday as planned, while the University of Mississippi, host of Friday’s debate, said it knew of no postponement plans.

Still, at the University of Mississippi in the town of Oxford, where Friday’s debate is supposed to take place, students told Al Jazeera they were angry that the event might be postponed.

“John McCain needs to come here and handle this,” said Silas Reed, a music student at the university. “It seems like he’s trying to pull some kind of stunt.”

Amanda Boozer, an international studies student, said McCain was overestimating the need for his presence in Washington to help the bail-out negotiations.

“I understand that he wants to play a central role in helping to fix things but it’s important that he is here too.”

However, Tyler Craft, the president of the university’s Republican party, said McCain just wanted to work in a bi-partisan way to get the crisis resolved.

“He’s stepping up and doing his job as a senator,” Craft said. 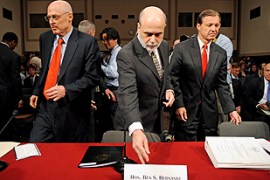 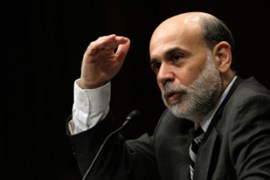