The Chinese health ministry said in a briefing on the crisis that the total number of babies admitted to hospital after drinking the poisoned formula was now 12,892, according to Xinhua news agency.

The statement from the Hong Kong government said the girl was found to have a stone in her left kidney after her parents took her to a clinic on Friday.

The child had been drinking two or three cups of poisoned formula for the past 15 months, although she had no symptoms.

Doctors referred the child to a hospital, but she was subsequently discharged and her condition is good, the statement said.

News of the sick child comes days after the Hong Kong government ordered a recall of affected brands of milk powder.

It has set up a telephone number for parents and is advising people not to consume the affected brands, but it has faced criticism for not acting quickly enough after news of the tainted formula emerged.

Melamine, a chemical normally used to make plastics, was added to milk formula in China because it raises the apparent protein content.

Several countries have suspended the import and sale of all Chinese-made milk and milk products in the wake of the scandal. 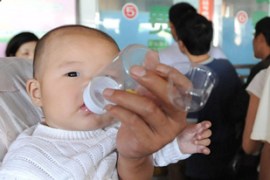 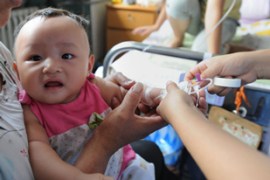