Authorities in mainland China said melamine was found in regular milk being sold by three of the country’s biggest dairy companies.

In the southern territory of Hong Kong, the government there said melamine had been discovered in drinks, ice creams and yoghurt made by Yili, one of the big brands that was selling the contaminated milk on the mainland.

“We urge the public to stop drinking products from the brand,” Constance Chan, the head of Hong Kong’s Centre for Food Safety, told reporters, after saying melamine was found in eight out of 30 Yili products.

Deploying thousands of inspectors across China, safety officials said they would start nationwide testing of all dairy products before they reached shop shelves.

As the scandal spreads authorities have also arrested 18 people, sacked several officials and confiscated about 300kg of suspect chemicals, including more than 200kg of melamine.

Al Jazeera’s Laura Kyle, reporting from Beijing, said besides the 18 arrested, other people were being questioned and the authorities were considering pressing criminal charges.

On Wednesday China’s State Council, or cabinet, in a meeting chaired by Wen Jiabao, the premier, denounced the dairy industry as chaotic but also admitted that the country’s product inspection system was deeply flawed.

“The Sanlu infant milk powder incident reflects chaos in the dairy products market and loopholes in supervision and administration which has not been vigorous,” said a summary of the meeting released in state media.

The report said the council ordered a shake up of the industry, pledging to “resolutely punish law-breaking criminals and conscientiously pursue the culpable businesses, supervisory agencies and administrative heads”.

Wen was quoted as saying that inspection exemptions that had been granted to certain “high quality” companies would no longer apply to food suppliers.

The health scare erupted after the Sanlu Group, which is 43 per cent owned by New Zealand dairy giant Fonterra, halted production last week and announced a big product recall.

A subsequent probe found a 22 of 109 Chinese dairy producers made products adulterated with the substance and two of the producers had recalled exports to Yemen, Bangladesh, Myanmar, Gabon and Burundi.

Local media have kept quiet about claims that Sanlu and officials in the city of Shijiazhuang, capital of Hebei province – where the company is based – concealed the poisonings from the public and senior authorities during the Beijing Olympics in August.

On Wednesday a Hong Kong-based newspaper reported that Yang Chongyong, a vice-governor of Hebei, knew from as early as 2005 that melamine was being used in its milk products.

The scandal, which has seen thousands of parents in southern China flood into Hong Kong to buy foreign-made milk powder, is the latest to rock China’s food industry, which has been tarnished by a series of health scares in recent years. 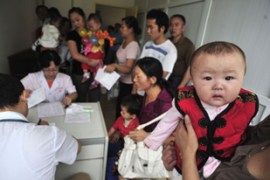 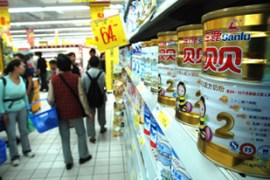 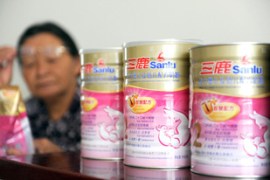