Our Ukraine, the party led by Yushchenko, then pulled out of the coalition with Tymoshenko on September 2 after her party joined the opposition in passing a law curbing the president’s powers and boosting those of the premier.

After both sides failed to settle their differences during a 10-day reconciliation period, Arseny Yatsenyuk, the parliamentary speaker, offically declared the ending of the coalition on Tuesday.

Yatsenyuk said: “I officially announce the collapse of the coalition of democratic forces. From now on, responsibility lies with the Ukrainian parliament. This has been long expected, but for me it is extremely sad.

“I would not call this an apocalypse. It is a challenge for  democracy, but I hope we will overcome this challenge together.”

Tymoshenko will now have to resign but is likely to continue as prime minister until the formation of a new cabinet.

If the parties fail to form a new coalition within 30 days, elections can be called by the president.

Speaking on Tuesday, Yushchenko said his country’s young democracy was resilient and would not accept any interference from Moscow in its affairs.

He accused Tymoshenko of plotting with the Regions Party, Ukraine’s pro-Russia opposition, against him to form a new governing coalition in negotiations which he said had a “cynical, behind-the-scenes and treacherous character”.

Tymoshenko has rejected the charge that she is in league with Moscow, saying she is no Kremlin ally.

European officials have warned that Ukraine could be the next target for interference by Russia because of its high proportion of Russian-speakers and tensions over Russia’s Black Sea fleet, which is based in Sebastopol in southern Ukraine.

The prime minister could now start trying to build a new coalition, possibly with the Regions Party, which is led by Viktor Yanukovych, a former prime minister.

Speaking at a meeting with regional party leaders on Tuesday, Tymoshenko said: “The government is going to work for a long time and is going to work successfully despite all these storms… Because this is a storm in a teacup.

“I believe we can find a mutual understanding in parliament.” 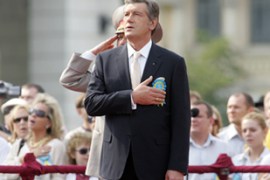 Kiev says entry into alliance is only way to strengthen military capabililities.