The incident followed the stabbing of a nine-year-old boy by a Palestinian in a nearby Jewish outpost earlier in the day. His wounds were not life-threatening.

“This is an intolerable phenomenon and it will be dealt with in the strongest way by Israel’s law enforcement authorities,” Olmert said.

“They broke windows and shot at people here and there who came out of their homes to try to protect their neighbours.”

Yigal Amitai, a spokesman for the nearby Yitzhak settlement, said the Palestinian who stabbed the boy had come from Asira al-Kabaliya.

Asked whether Yitzhar settlers had taken the law into their own hands, he said: “I think it is time for Israel to stop playing the victim, and start being the aggressor.”

Zehava Galon, a legislator from Israel’s left-wing Meretz party, accused Israeli authorities of failing for years to punish settlers who break the law.

‘Law of the jungle’

Amos Harel, the military affairs correspondent for Israel’s Haaretz newspaper, said the “law of the jungle” applied in the West Bank.

“The settlers are in danger and let’s not get that wrong. They face daily risks, and their way of settling accounts is very violent and built on deterrence,” he wrote.

At least 500,000 Jews live among 2.5 million Palestinians on West Bank land captured by Israel in a 1967 war, including Arab East Jerusalem.

In his remarks to the cabinet, Olmert noted that settlers at a West Bank outpost built without government permission had broken the hand of an officer on Wednesday during an army operation to confiscate construction equipment.

Olmert, the focus of a series of corruption investigations, is due to resign later this week after his Kadima party holds an election to select a new leader on Wednesday, although he could stay on as a caretaker prime minister until his successor forms a new government, or until an early national election is held.

The word “pogrom” has particular significance in Israel, where it is used mainly to describe violence against Jews in Russia in the late 19th and early 20th centuries.

Olmert has pledged to use the remainder of his tenure to continue to pursue a peace deal with the Palestinians. 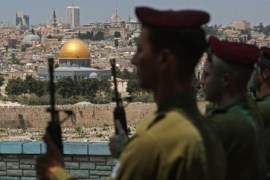