Zuma’s supporters have repeatedly said that the case was part of a political witch-hunt by Thabo Mbeki, the South African president, against Zuma.

Nicholson cautioned that his ruling did not touch on guilt or innocence and said prosecutors could file charges again once they had met the requirement of consulting with Zuma.

But the National Prosecuting Authority is likely to come under pressure not to file charges again.

Parliament is pushing through legislation to scrap the Scorpions, an elite investigating unit that had handled the Zuma case, and some business leaders have suggested that charges should be dropped in the interests of political stability in South Africa, the continent’s economic powerhouse.

The public gallery of the court, where many ANC officials had gathered, erupted in cheers when the ruling was read out.

Outside about 10,000 of his supporters, who had gathered despite the bad weather, broke into song and dance when they heard the news.

“He [the judge] said Zuma’s rights were trampled and these people were breaking the law. This is a lesson that we should not keep quiet if the people we give power to abuse those powers,” he said in Zulu.

To wild applause Zuma broke into his trademark song “Umshini wami”, which translates as “Bring me my machine gun”.

Zuma is virtually guaranteed the presidency in 2009 elections because of the ANC’s electoral dominance.

But had the case gone ahead, Zuma would have been ineligible.

“The South African constitution is very clear that any person who has been convicted for any period of more than six months on a criminal charge cannot be the president,” Mohammed Adow, Al Jazeera’s correspondent in South Africa, said.

“It was only really the court case that stood between him and the presidency.”

Tensions had mounted ahead of the court case, with Zuma supporters threatening to make South Africa ungovernable if his trial went ahead.

Zuma was initially charged in 2005, but that case was dismissed on a technicality in 2006.

He was recharged in December 2007 – just days after beating Mbeki for leadership of the ANC party – with racketeering, corruption, money laundering and fraud related to a government arms deal in the late 1990s. 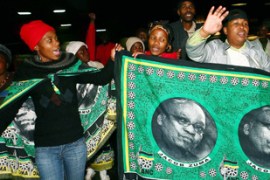 Court due to rule on Zuma trial