The judgment, at the conclusion of a six-year court case, said: “This means that the state cannot be held responsible for any breach of contract or wrongful act committed by Dutchbat [the Dutch battalion of the United Nations].”

“Neither is the state liable for wrongful action taken by those in charge of the armed forces or members of the national government.”

Hasan Nuhanovic, who lost his parents and younger brother in the massacre, said the ruling was “without justice”.

“I have been betrayed so many times before … the first time was 13 years ago by the members of Dutchbat,” he said, adding that he would appeal against the ruling.

In the civil suit argued before the court in June, the applicants said Dutchbat troops there to protectthe enclave had handed Muslim refugees over to Bosnian Serb forces.

This action had violated several national laws and international treaties, the plaintiffs said.

The case was initiated by Nuhanovic and Mehida, Damir and Alma Mustafic, the widow and children of another victim, Rizo Mustafic.

They claimed the Dutch state was liable as it exercised full command over the military.

“Dutchbat was professionally charged with the safety of civilians,” Liesbeth Zegveld, the plaintiffs’ lawyer told the court in June.

“They had a humanitarian assignment, but they acted contrary to their instructions.”

Srebrenica was a UN-protected Muslim enclave until July 11, 1995, when it was overrun by Bosnian Serb forces which loaded thousands of men and boys on to trucks, executed an estimated 8,000 and buried their bodies into mass graves.

The Srebrenica massacre, Europe’s worst atrocity since the second world war, has been termed genocide by the International Court of Justice, which handles disputes between nations, and the International Criminal Tribunal for the former Yugoslavia (ICTY).

Survivors of the 1995 Srebrenica massacre are to sue Bosnian Serb authorities for the mental anguish they suffered.

Survivors of Bosnia’s wartime massacre in Srebrenica are to sue  the United Nations and the Netherlands for more than half a billion dollars for failing to protect the enclave. 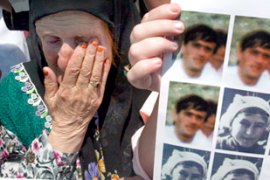 Dutch in dock for Srebrenica crimes

Survivors and relatives sue Netherlands over “complicity” in massacre of Bosnians.

Newly discovered mass graves reveal the horrors of the 1995 massacre.