Larry Jagan, a political analyst, told Al Jazeera: “Samak is likely to come under a lot of criticism from the opposition democrats. It’s the beginning of the end.

“The real issue is the economy. We have seen the bhat at its lowest against the dollar since December.

“Samak has said he’s not going to clal snap polls, but I suspect we are going to see him stand down.”

Before the session Samak said in a national address: “I am not afraid but I am concerned about chaos in the nation.”

Protesters remained camped on the grounds of Samak’s office on Sunday.

Police have used tear gas on occasion, but have chosen to take a non-confrontational approach at other times, leaving the protest to take on a carnival-like atmosphere.

Al Jazeera’s Selina Downes, reporting from Bangkok, said that a pro-government lobby had started to gather near the demonstrators outside Government House office complex.

“There are about 1,000 government supporters. They call PAD a political mafia and argue that this government was elected. They say they are trying to uphold the principles of democracy, so the prime minister has been thrown something of a lifeline.”

On Sunday there was no visible police presence at the prime minister’s compound.

Samak concedes that his government and the courts have failed to evict protesters and now needs the support of the parliament.

On Saturday, Samak met King Bhumibol Adulyadej, the head of state. Reporters had expected him to make a statement on his return to Bangkok, the capital, but he avoided them at a military airfield.

The unrest reached a peak on Friday when Bangkok police fired tear gas and rubber bullets to repel an assault on their headquarters by about 2,000 protesters.

Thousands of foreign tourists had been stranded on the resort of Phuket, damaging the country’s image as a holiday destination, after the island’s airport closed. It was reopened on Sunday.

Speculation is growing that Samak will call a snap election. His People Power Party has strong support in the rural areas.

Parliament is to debate the government budget for the coming year on Wednesday. It is expected to be approved and would give sitting ministers funds to spend in ways that would support their election prospects.

Thai shares have fallen 23 per cent since the street protests began in May amid fears of major unrest or policy paralysis at a time of stuttering economic growth and high inflation. 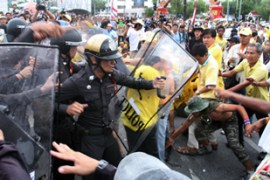