The protesters then rallied near India’s parliament, carrying the poster and chanting “Free Tibet!” and “Down with China!”

Hundreds of police and armed paramilitary soldiers surrounded the marchers and stood by with tear-gas canisters and water cannons.

A day earlier, shortly before the Olympics opening ceremony, police detained hundreds of Tibetans after they tried to storm Chinese consular offices in New Delhi.

In Nepal, which has been the scene of many pro-Tibet demonstrations, police stepped up security around the Chinese embassy and its visa office, with hundreds of police in riot gear stationed on streets leading to the offices.

Ramesh Thapa, a police official, said more than 500 Tibetan protesters were detained to prevent them from reaching the office.

Thapa said the detained protesters would be freed later in the day.

Exiled Tibetans in Kathmandu, the capital of Nepal, have been protesting daily after deadly unrest erupted against Chinese rule in the Himalayan region in March.

More than 20,000 Tibetans live in Nepal – which officially considers Tibet a part of China – since they fled an unsuccessful uprising against Chinese rule in 1959.

In Beijing, where the Olympics are taking place, activists held several small-scale demonstrations, including a “mock die-in” in Tiananmen square, staged by five activists from the US, Germany and Canada. 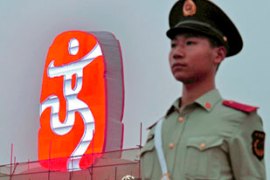 Victims said to be relatives of the US men’s volleyball coach. 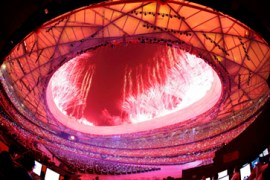 Bursts of fireworks, drummers and dancers light up Beijiing to open the games.