They also tried to block off the road, Kumar said.

Anger between Hindus and Muslims in the Himalayan region has flared since June when the government in Jammu-Kashmir decided to award 99 acres of land to the Shri Amarnath Shrine Board, a trust that maintains the Amarnath shrine, a revered Hindu site.

The shrine contains a large icicle revered by Hindus as an incarnation of Lord Shiva, the Hindu god of destruction and regeneration.

Hundreds of thousands of Hindus are currently visiting the shrine on an annual pilgrimage.

The state government was forced to revoke the land transfer last month after a week of often violent protests by Muslims who called the move an attempt to build Hindu settlements in the area and alter the demographics of the state.

Six people were killed and hundreds wounded in those protests.

But the cancellation angered Hindus and set off demonstrations by them.

Jammu, the only Hindu-majority city in the state, and Samba, a town on its outskirts, have witnessed massive protests ever since.

The clashes come a day after a Muslim protester was killed demonstrating against alleged attacks on Muslims by Hindus in the Jammu region of Jammu-Kashmir.

Sajjad Haider, editor-in-chief of the Kashmir Observer newspaper, told Al Jazeera that in Jammu, “where the agitation has been alarming, Muslims have been targeted by right-wing Hindu groups”.

“The unfortunate part is that the government of India has been totally caught off guard and the situation has developed into full-scale confrontations.”

Haider said: “They have let things worsen in Jammu. There have been no measures taken so far to contain the violence which has been exerted against minority [Muslim] members and government property.

“On the other hand we have seen in the Kashmir valley that the [Indian] government has come down heavily on protests [by Muslims] against the violence on minority [Muslim] members, which have been peaceful.

“In Jammu, they have taken a soft approach against protesters who are obviously a minority there.”

Syed Ali Shah Geelani, a separatist leader fighting Indian government forces for a Kashmir with closer ties to Pakistan, said the “peaceful protests” would continue after “harassment of Muslims by Hindu extremists”.

A Hindu group leader, Shri Amarnath Yatra Sangrash Samiti, who organised some of the protests, said: “We stick to our core demand, restoration of land.”

Two Hindu protesters were shot dead and at least 14 police and paramilitary soldiers were injured in Jammu city on Monday, during Hindu protests against the government’s U-turn, a government statement said.

Shops and businesses in Srinagar have closed in response to the alleged assaults on Muslims by Hindus.

Demonstrations by Hindus in the Kashmiri valley have stopped transport along the region’s major highway, preventing food, fuel and medical supplies from reaching towns and cities.

Trader associations said lorries loaded with vital goods such as medicines, vegetables, meat and fuel were stranded on the region’s main 300km highway, the only surface link between the Kashmir valley and the rest of India.

About a dozen Muslim groups in the state have been fighting Indian government forces to carve out a separate homeland or to merge Jammu-Kashmir with Pakistan.

More than 68,000 people, mostly civilians, have been killed since the start of the conflict in 1989. 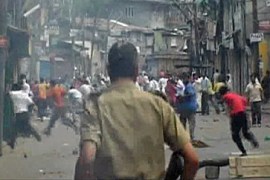