An interpreter pushed the rifle aside as she fired two shots, which missed, the prosecution said. One of two shots fired by a soldier in response hit her in the torso and she was subdued.

Elaine Whitfield Sharp, a lawyer for Siddiqui’s family, called the charges “a tall story” and disputed the US government’s earlier claims that Siddiqui had gone underground for several years before her capture.

The family suspects that after she vanished with her three children while in Pakistan in 2003, she was secretly held and possibly tortured before US authorities finally brought charges to justify her detention.

“I believe she’s become a terrible embarrassment to them, but she’s not a terrorist,” Sharp said. “When the truth comes out, people will see she did nothing wrong.”

At the time of the incident, Afghan officials gave conflicting accounts of what transpired between Siddiqui and the US interrogators, while US officials offered no comment.

General Khan Mohammad Mujahid, police chief in central Ghazni province, initially said police argued with the Americans over giving up custody of Siddiqui, But he later said there was no argument and that the woman lunged at one of the US soldiers.

US authorities have said in the past that they believe Siddiqui, who received a biology degree from the Massachusetts Institute of Technology and wrote a doctoral thesis on neurological sciences at Brandeis University, outside Boston, has links to al-Qaeda.

Her arrest last month prompted protests in Pakistan, with demonstrators, many from Jamaat-i-Islami, calling for Siddiqui’s release.

If convicted, she faces up to 20 years in prison on each charge.

Washington has sought the public’s help in nabbing the seven ‘terror-suspects,’ thought to be plotting attack against the United States. 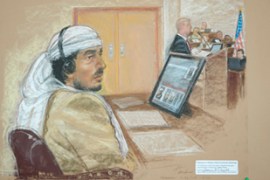