Todd Baer, reporting for Al Jazeera from India, said a woman who lost seven members of her family – her mother, father, two brothers and their wives and a three-year-old niece – blamed the police for inaction.

“Everything happened due to police negligence,” she said. “I have lost everything – I do not know what to do. My life is over.”

Witnesses said only a handful of police were on duty to help with crowd control and rescue workers were slow to respond.

“The police did not allow people to step back. Meanwhile, people started coming down from above shouting go back, go back,” said Ramesh Kumar Saini, who was at the temple.

“Since the police did not allow the people to go back, this tragedy happened.”

One pilgrim said: “We are not scared. The power of the goddess calls us and the goddess did as she wanted.”

Police said 145 people, many of them women and children, were killed and 37 injured.

An estimated 25,000 people were on the mountain at the time to celebrate Shravan Navratras, a nine-day festival that honours the goddess Shakti, when rumours of a landslide caused panic among pilgrims.

Pilgrims were still entering the complex when thousands of pilgrims already at the temple began running down the path and collided with them.

The temple’s design – with a concrete wall on one side and a precipice on the other – meant there was nowhere for pilgrims to escape.

At one point, a guard rail broke and dozens of people fell to their deaths.

Prem Kumar Dhuma, chief minister of Himachal Pradesh state, announced an investigation into the cause of the disaster and said 100,000 rupees ($2,380) would be paid to the families of each victim.

Mas funerals began on Monday for  families, many of which lost several members in the stampede. 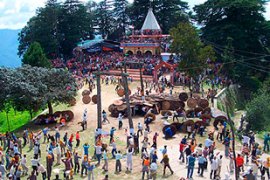 At least 145 worshippers feared dead in tragedy at temple in northern hill state.