Mourners laid flowers and crossed themselves at the ceremony.

The Nobel laureate, who spent eight years in the Gulag, the infamous Soviet prison-camp system, will be buried in an Orthodox ceremony in the 16th-century Donskoy monastery in the capital on Wednesday.

Among the mourners on Tuesday was Sergei Aristarkhov, who brought a copy of One Day in the Life of Ivan Denisovich, Solzhenitsyn’s ground-breaking account of life in a Soviet forced-labour camp, and a bouquet of white flowers.

“I came here because in the 1970s, I read this one little book that completely changed everything for me… When I heard the news yesterday, it was a terrible blow for me,” said the 64-year-old mourner.

“He wrote and wasn’t afraid,” said Alexander Shelyudkov, a builder who attended the ceremony

“He wasn’t afraid to speak his mind…. He was an example for us all,” said Valentina Reshetnikova, a retired geneticist.

On Monday, Dmitry Medvedev, the Russian president, led tributes to the writer, with a condolence telegram to his family in which he praised “one of the greatest thinkers, writers and humanists of the 20th century”.

Nicolas Sarkozy, the French president, Angela Merkel, the German chancellor, Condoleezza Rice, the US secretary of state and Mikhail Gorbachev, the Soviet Union’s last leader, were among politicians around the world who honoured the writer.

Russian newspapers have been mourning the passing of the literary giant.

“A Prophet Has Died In His Homeland,” read a headline in the Komsomolskaya Pravda daily.

Solzhenitsyn shook the foundations of Soviet power with his haunting accounts of the forced labour camps.

He was awarded the Nobel Prize for literature in 1970 and was expelled from the Soviet Union in 1974.

He returned to Russia in 1994 in a train journey to Moscow that started in the city of Magadan, where thousands were killed in the camps.

At every stop along the way, he was greeted by large crowds of fans.

Despite this, his addresses on Russian television about the perils of imitating the West and the need to revive Orthodox values, although more respected today, were unpopular in Russia at the time.

Most recently, he campaigned for greater local self-government in Russia, criticising Putin, in his former role as president, for rolling back democratic freedoms.

However, he also praised him for reviving Russia’s greatness.

In 2007, he was awarded the State Prize, Russia’s highest honour, but had lived largely out of the public eye in recent years, concentrating on the publication of his 30-volume complete works. 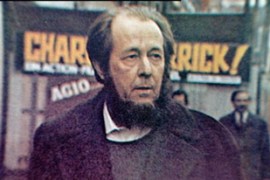 Russian Nobel prize winner was one of the most prominent dissidents in the Soviet era.