Meanwhile, national television reported that the scene in Isle of Youth, a Cuban island where more than 200,000 people live, was one of devastation after the monster storm earlier ground its way  across the low-lying island of fishing villages, factories and citrus farms.

Homes were under water, warehouses toppled and roads washed away on the Isla of Youth, state television said, though there were no immediate reports of casualties.

“So far no deaths have been reported but the situation is really critical. It is just dramatic here,” a Cuban TV correspondent said by phone.

Two boats that were docked at the port of Nueva Gerona, the main town on the island, “are in the middle of the city,” and the Cuban phone company’s communications tower was knocked down, the correspondent added.

“The wind here is terrible. This is looking very bad,” said a woman named Consuelo, a Nueva Gerona resident who preferred not to give her full name.

“I can’t leave from nor open the doors or anything because the wind will take everything away,” she said.

“Right now, we have a lot of rain, many fallen trees and the banana crop is almost completely on the ground,” said Noel Diaz Gonzalez in the Pinar del Rio town of Paso Quemado.

“We continue evacuating people to stronger buildings but so far there are no building collapses or serious damage.”

In Havana, east of where Gustav was to make landfall, people were moved from low-lying areas and many of the city’s crumbling buildings, which could collapse under heavy rain and wind.

Trucks with loudspeakers passed through the streets, warning residents to take precautions.

Hurricane deaths are rare in Cuba, where evacuations are well-organised and begin early, but Gustav killed at least 86 people in the Dominican Republic, Haiti and Jamaica.

No deaths were reported in the Cayman Islands, a wealthy banking centre and British territory brushed by Gustav overnight.

Before Gustav struck, Juan Jacomino, a Cuban journalist, told Al Jazeera: “This major danger is going to hit us with all it’s worth – it’s not a possibility it is a fact.

“[Gustav] is the same strength a hurricane as Katrina … there will be economic losses for sure.

“The western part of Cuba is going to be most affected but also Havana, which has two million people … may suffer a lot.”

Gustav could rival the threat posed by Katrina in 2005 and emergency preparations extended to the US Gulf Coast, where highways around New Orleans were jammed on Saturday and hundreds lined up to board buses.

Scarred by still-fresh memories of Katrina and spooked by Gustav’s rapid move toward Category 5 strength, an estimated 1 million residents fled the US Gulf Coast on Saturday rather than brave the deadly storm.

Ray Nagin, the New Orleans mayor, has ordered an evacuation of the city starting early on Sunday to prepare for what he called “the mother of all storms”.

Forecasters at the National Hurricane Centre said they were surprised at how quickly Gustav gained strength as it slammed into Cuba’s tobacco-growing western tip as a monstrous Category 4 hurricane on Saturday. It went from a tropical storm to a Category 4 hurricane in about 24 hours, and was likely to become a Category 5 – with sustained winds of more than 249 kph or more – by Sunday.

“That puts a different light on our evacuations and hopefully that will send a very clear message to the people in the Gulf Coast to really pay attention,” David Paulison, head of the Federal Emergency Management Agency, said.

George Bush, the US president, has declared a state of emergency in Texas and Louisiana.

Haley Barbour, the governor of Mississippi, called for the evacuation of residents living in trailers and other temporary housing along the state’s 113km coastline, where they have been since Hurricane Katrina struck.

On Saturday afternoon, the National Hurricane Centre issued a hurricane watch for Alabama, Mississippi, Louisiana and part of Texas.

A hurricane watch means hurricane conditions are possible within the watch area, generally within 36 hours. 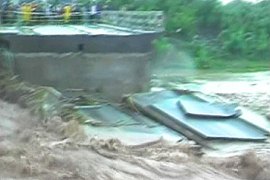 Gustav bears down on Cuba and the US after leaving trail of destruction in Caribbean.