Mahmoud Ahmadinejad, the president, said: “In whichever negotiation we take part … it is unequivocally with the view to the realisation of Iran’s nuclear right and the Iranian nation would not retreat one iota from its rights.”

He made the remark in a statement posted on the presidential website after talks with Bashar al-Assad, the Syrian president.

Al-Assad visited Tehran a few weeks after he said in Paris he would respond to a request by Nicolas Sarkozy, the French president, and use his good relations with the Islamic Republic to help resolve the nuclear stand-off.

The presidency website quoted al-Assad, on his third trip to Tehran since Ahmadinejad gained power in 2005, as saying that “Syria strongly stands by Iran and will not change its stance”.

On the nuclear issue, al-Assad said: “We have told the Europeans that Syria believes that any country including Iran, and based on international treaties, has the right to enrich uranium and have a nuclear power plant.”

Ali Reza Ronaghi, Al Jazeera’s correspondent in Tehran, said that the Persian carpet, Iran’s most famous export, could provide a guide to the country’s approach to nuclear diplomacy.

He said: “Two weeks ago – at the conclusion of talks in Geneva – Saeed Jalili [the chief nuclear negotiator] said that diplomacy “is very precise work, in certain cases a very beautiful endeavour, and hopefully the end result, the final product, will be beautiful to behold.”

“Like carpet-weaving – the process of negotiating Iran’s nuclear future would move ahead in millimetres.”

Meanwhile, unnamed US officials on Friday claimed that Iran has failed to win support from non-aligned nations this week for lifting UN sanctions and removing the UN Security Council out of the dispute over its nuclear programme.

The US is not a member of the non-aligned group but learned of the negotiations from representatives of countries that are members, said officials who spoke to reporters at the State Department on condition of anonymity.

One US official said the conference, which operates on a consensus basis, had deadlocked on portions of a draft statement presented by Iran that demanded the removal of sanctions and dismissed UN authority as well as affirmed Iran’s right to possess the entire nuclear fuel cycle, something world powers object to.

The official said that some members, notably Cuba, Belarus and Venezuela – who all have poor relations with the United States – spoke in favour of the Iranian draft, but other opposing countries prevailed in watering down the statement.

Copies of the draft and the final statement provided by the US officials, show the Iranians unsuccessfully tried to get approval for a paragraph that said “sanctions imposed on Iran for its nuclear programme are of a political nature and should be promptly removed”.

That paragraph, which also said there is “no legal basis” for the UN Security Council to be involved in the issue, does not appear in the final statement.

After the final statement was adopted on Wednesday, Iranian officials said it was a victory.

Ali Ashgar Soltanieh, the country’s senior representative to the UN nuclear watchdog, the International Atomic Energy Agency, said it sends a “strong positive signal that the only way is negotiation and dialogue” over the nuclear stand-off. 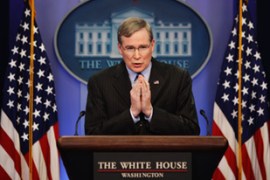 Iran has said that it will not stop uranium reprocessing work, rejecting a European threat that Tehran had less than two weeks to freeze uranium conversion or face referral to the UN Security Council for possible sanctions.