Russia formally recognised the independence of South Ossetia and Abkhazia, two breakaway regions inside Georgia that have received long-term support from Moscow.

The move follows the recent conflict between Russia and Georgia, prompted by Georgia’s attempts to re-establish its authority over South Ossetia.

“I have signed decrees on the recognition of the independence of South Ossetia and Abkhazia,” Dmitry Medvedev, the Russian president,  said on Tuesday in a pre-recorded address on national television.

“This is not an easy choice but this is the only chance to save people’s lives,” he said.

He said the conflict had created a “new reality” that justified Russia’s decision to recognise the independence of South Ossetia and Abkhazia.

“The breakaway regions have now been completely ethnically cleansed,” she said.

Celebrations were under way in Sukhumi, the Abkhaz capital. where some jubilant residents fired shots in the air to celebrate.

Hundreds of people also gathered in the main square of Tskhinvali, the South Ossetian capital, hugging each other and waving the separatist flag.

There was a deafening roar of celebratory gunfire from Kalashnikov guns and antique hunting rifles.

The West, which has backed Georgia, condemned Russia’s move to recgonise the breakaway regions.

Russian forces began to withdraw from Georgia last week, but Russian forces have not pulled back to their positions before the crisis, as Moscow agreed to do under a peace deal brokered by Nicolas Sarkozy, the French president. 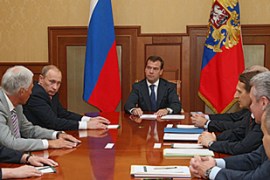