Sudanese authorities claim the camp is used as a base by armed groups in the region and have launched a number of failed attempts to seize arms from the camp.

But about 90,000 people live in Kalma, many of them having fled their homes due to fighting in western Darfur, where armed groups rose up against the government more than five years ago.

Police moved into the Kalma on Monday.

The state-run Suna news agency said armed Kalma residents fired on police when officers moved in to seize weapons after receiving reports that a large cache had been delivered to Kalma.

They were “met with strong resistance from the instigated and mobilised displaced citizens who were incited to put barricades and to move in the streets,” Suna reported.

Casualty figures from the clashes were impossible to verify, but residents have asked UN troops for burial shrouds and protection for funerals.

A commander with the rebel Sudan Liberation Army said that at least 36 people were killed.

That number was confirmed by camp residents.

UN-led peacekeepers were in talks on Tuesday over how best to manage the crisis.

International charity Medecins Sans Frontieres, which runs a clinic in Kalma, said it was trying to regain access to the camp.

The group said it managed to evacuate 49 people suffering from gunshot wounds to hospital in nearby Nyala, where one died overnight.

“We’ve not had any reports of new incidents or new casualties in our clinic. At the moment we are trying to re-access the camp to get back to our normal work,” Jose Hulsenbeq, an MFS co-ordinator, said.

Camp residents and Darfur rebels have accused the government of trying to clear the camp in an attempt to force residents to return to their homes under a government resettlement plan.

But US abstains and criticises concerns about Sudan president’s possible indictment. 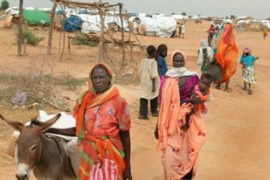