He said that “all options” were being considered to prevent the protest.

A Jerusalem-based spokeswoman for the group said early on Saturday that the two converted fshing boats were just hours away from entering Gaza’s territorial waters.

“They are out there. They are two hours away from the point they were aiming for before they enter Gaza territorial waters,” Angela  Godfrey-Goldstein said.

“They made very good progress for the night and everyone is fine,” she said, although co-ordinators on land were having problems communicating with the boats via on-board satellite phones.

Several dozen people, mostly reporters, gathered at Gaza City’s main port to await the arrival of the boats, which are sailing under Greek flags.

Al Jazeera’s Ashrif Amritti, reporting from Gaza Strip, said that Palestinian vessels would attempt to travel out to sea to meet the activists.

The activists plan to deliver 200 hearing aids to a Palestinian charity for children and hand out 5,000 balloons.

Before setting sail from Larnaca on Friday they said that they hoped other groups would follow their example.

“It’s not about our fear, it’s about the people waiting in Gaza, you can’t think about anything else.”

Paul Larudee, a Free Gaza organizer, said it was “highly unlikely” that the Israeli navy would fire on the boats to stop them.

But he said the group expects Israeli authorities to intercept the boats and arrest those onboard.

Gaza’s 1.4 million Palestinians are already largely confined to their narrow strip of land by Israeli and Egyptian border closures.

“Israel has an obligation towards the Palestinian people, being the occupying power,” Eyad al-Saraj of the International Campaign to End the Siege said.

“Gaza has a collapsed economy, it is seriously deprived, dependent on charity … unemployment is very high. The place is desparate, the people are desparate because this is really a kind of prison,” he told Al Jazeera.

A trickle of people are still allowed to leave for medical care, jobs abroad and for the
annual Muslim pilgrimage to Saudi Arabia.

Israel and Hamas have observed a fragile truce since June. 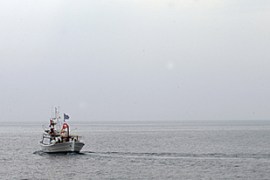