A unnamed police source told the AFP news agency that the bombers came from Khyber tribal district and were trained in Miranshah, the main town in North Waziristan tribal district.

On Thursday, a spokesman for Tehreek-e-Taliban Pakistan, the umbrella group for the country’s pro-Taliban movement, said the attack was a response to military operations in Swat and Bajaur.

Pakistani forces have been battling Taliban fighters in Bajaur, a tribal region bordering Afghanistan, for nearly two weeks. The government says more than 500 Taliban and 30 soldiers have been killed.

Security was tight on Friday as hundreds of people gathered to attend funeral prayers for the victims. Markets and shops were closed in the town to protest against the attack.

The Pakistani Ordnance Factories at Wah is a cluster of about 20 industrial units producing artillery, tank and anti-aircraft ammunition for the Pakistani armed forces and employs around 25,000 to 30,000 workers.

One of the explosions was outside the factory’s main gate, while the second went off at almost the same time near another gate, Sardar Shahbaz Hussain, a police official said.

The blasts came two days after a suicide bomber attacked a hospital in the northwestern town of Dera Ismail Khan on Tuesday, which killed 30 people.

The attacks have heightened tensions in Pakistan which is in turmoil after the resignation of Pervez Musharraf, the president.  Leaders of the ruling coalition, which had threatened impeachment proceeding against Musharraf were meeting on Friday to discuss his successor. 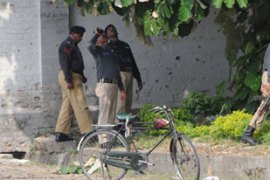 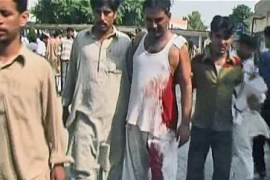 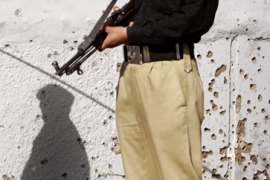