The remarks by Alambo, who said he speaking on behalf of Ibrahim ag Bahanga, leader of the Tuareg rebellion Mali, were aired by Niger’s state television, according to a Reuters report.

The minority rebel groups in Niger and Mali took up arms against their respective central governments last year complaining of unequal distribution of wealth in the oil-rich Saharan region and poor representation in government and the army.

Libya, the fourth largest African nation, wields considerable influence in parts of the Sahara and Sahel regions on its southern fringe through mining and tribal links.

On Sunday, Gaddafi warned insurgent leaders that they were “playing around with a dangerous and sensitive demographic area”.

“They are playing around with, and harming, the Islamic area,” he was quoted as saying by Libya’s state television and Jana news agency.

“Do not waste time and cause hardships for children and women in the Sahara without need.”

The Niger government made a peace pact with the Tuareg community to end a series of insurgencies in 1995, but another rebellion was sparked off in February 2007 when fighters from the MNJ attacked a number of military targets.

Last month the Mali government entered a ceasefire pact with the Tuareg rebellion in the country following talks in the Algerian capital, Algiers, to end clashes in the vast northern desert region. 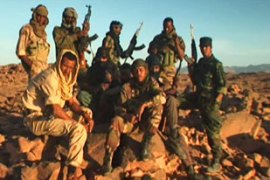 Ceasefire pact signed in Algiers after nearly a year of clashes. 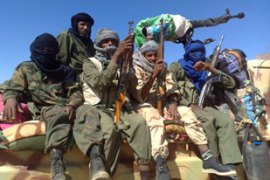 A mainly Tuareg group is waging a low-level war in the country’s north. 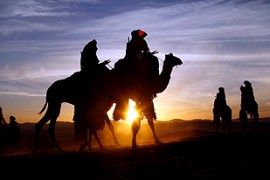 Many killed in Niger clashes

At least 17 die in fighting between government forces and Tuareg fighters.