The violence came as the UN Security Council voted unanimously to renew  the mandate of African Union (AU) peacekeepers operating in Somalia for another six months.

UN Resolution 1831 also urged all members states to “provide financial resources, personnel, equipment and services for the full deployment” of the AU force, known as Amisom.

The attack came four days after more than 30 people – mainly civilians – were killed in fighting when Ethiopian forces opened fire on two buses near Mogadishu, according to eyewitnesses.

But the Ethiopian foreign ministry denied its troops killed civilians and put the death toll at only 11.

“The tragic killings of innocent civilians on Friday were not carried out by Ethiopian troops, but rather by al-Shebab insurgents who planted a bomb on the minibus,” it said in a statement on national television.

Ethiopian forces entered Somalia in late 2006 at the request of the largely powerless transitional government, helping to remove the Islamic Courts Union, which controlled large parts of the Horn of Africa country at the time.

UN officials also announced on Tuesday Somalia’s government had formally signed a peace deal – initialled in June – with some members of the opposition.

But the pact has been rejected by many Islamic officials and military commanders, who have insisted that Ethiopian troops propping up the Somali government unilaterally pull out of Somalia before peace talks can start.

The agreement has done little to quell violence in Somalia. 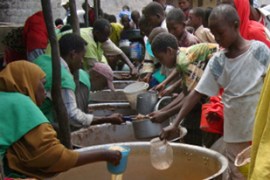