“But I am also a human being,” he said. “I might have made some mistakes, but I have hope that this nation and the population will tolerate those mistakes with the belief that my intentions were always clear and to the benefit of this country.”

“Today we have buried dictatorship for ever,” Gilani said in a special sitting of parliament.

The former general’s opponents rejoiced nationwide after he announced his resignation, which many hope will bring an end to a year of political fighting that has largely paralysed Pakistan.

Following the news of Musharraf’s resignation, Pakistani stocks rose over four per cent and celebrations took place across Pakistan.

World leaders urged stability and unity in Pakistan following Musharraf’s resignation, with the US administration saying it trusts Pakistan will remain a solid ally in its so-called “war on terror”.

“We’re all in this together. And the people of Pakistan and the government of Pakistan know that,” Gordon Johndroe, a spokesman for the White House, said.

“So we’re confident that while we certainly all have more to do when it comes to fighting terrorism, the government of Pakistan will continue in the effort.”

Mohammedmian Soomro, Pakistan’s senate chairman, will act as caretaker president until an election, which is expected in the next few weeks.

Pakistani officials said that Musharraf’s aides had held talks with the ruling
coalition, brokered by Saudi Arabia, the US and the UK, to allow him to quit in return for an indemnity for his previous actions.

But coalition officials said earlier that a draft of the impeachment charge sheet was still awaiting approval from senior officials and factions in Pakistan’s government are against any deal that would grant Musharraf legal immunity.

Sadiqul Farooq, a spokesman for the Pakistan Muslim League-N (PML-N), headed by Nawaz Sharif, a former prime minister, whom Musharraf ousted in a 1999 coup, said legal guarantees were out of the question.

Sharif’s party is the second largest in the coalition, and has said Musharraf should be tried for treason – which carries a maximum punishment of death.

There was speculation that Musharraf might go into exile, but close aides to Musharraf said he had no plans to go into exile – as several of Pakistan’s former leaders have done.

“He is not going anywhere,” one aide said.

In his address, Musharraf, wearing a dark suit and tie, said that Pakistan was “his life” and he took time to list a number of economic and political developments during his term as Pakistan’s president.

“Unfortunately, some elements acting for vested interests levelled false allegations against me and deceived people,” he said, in a scathing attack on his opponents.

“They said that during the last nine years our economic problems and electricity shortages were due to our policies. It is absolutely wrong and deception for the country.

“They never realised that they [opposition] could be successful against me, but they never thought how detrimental it would be for the country.”

In his speech, which lasted over an hour, Musharraf said that he introduced the “essence of democracy” to Pakistan.

“Everyone says I’m an army man, against democracy. I think that’s wrong,” he said. 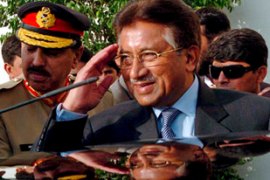 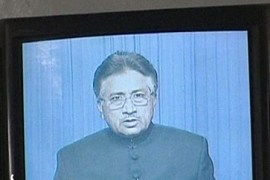 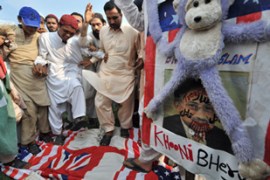