The soldiers have been conducting a months-long operation in Mosul, Iraq’s largest city in the north, to try to clear it of Sunni extremists and al-Qaeda operatives.

Sunday’s attack occurred at 4030 GMT as the body guards were seated on chairs near a checkpoint near the Abu Hanifa mosque in the former insurgent stronghold.

The assailant, wearing a black abaya robe, walked up to al-Obeidi’s party and detonated the explosives, the officials said on condition of anonymity because they were not supposed to talk to the media.

Some of the officials said the attacker was a woman.

But one of them said the attacker was a man who probably wore the flowing garment to conceal the explosives.

Officials at a nearby hospital said about 20 people were wounded.

They spoke on condition of anonymity because they were not authorised ro release information to the media.

Such attacks have become rare in the centre of Azamiyah since the US military built a concrete wall around the heart of the north Baghdad neighborhood, where Saddam Hussein, former Iraqi leader, took refuge when the city fell to US forces in April 2003.

Although Azamiyah was once a centre of resistance to the US and its Shia allies, many local Sunnis later abandoned the insurgency and joined the Awakening Council, which provides security there alongside Iraqi soldiers and police.

“While I was shopping just across the street, I heard a huge explosion,” said Omar Qassim, a member of al-Obeidi’s group.

“Body parts were flying through the air. I immediately realised that Farooq’s party was targeted and he was probably dead.”

The attack occurred about in an area where families often stroll on outings during hot summer nights.

Abu Mohammed, 54, who was shopping at a nearby grocery when the blast occurred, said: “I rushed to the scene of the explosion to see terrified people running everywhere, and women calling for their missing children.

“The situation was chaotic and horrible. I saw dead bodies, wounded people and blood stains on the ground. Later ambulances arrived and picked both the wounded and the dead. Some shops nearby were damaged.”

Al-Qaeda in Iraq has often targeted leaders of the Awakening Council.

But Khalil Ibrahim, an aide to al-Obeidi, said the attack could have been carried out by rivals within the council itself.

“We had received information that we would be targeted by groups within Azamiyah and within the Awakening movement itself,” he said, refusing to elaborate.

A senior police officer, speaking on condition of anonymity because the investigation had only just begun, said it was unlikely that explosives could have been smuggled into the area because of security checks around the wall.

He said he suspected the attack could have been part of a power struggle within the council.

Also on Sunday, insurgents raided a police checkpoint in the northern city of Mosul, killing one policeman and wounding another, the provincial police command reported. 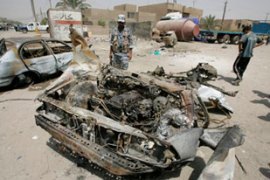