“We envisage that the prime minister must chair the cabinet and be responsible for the formulation, execution and administration of government business, including appointing and dismissing his ministers.

“A prime minister cannot be given responsibility without authority and be expected to deliver.”

A South African official close to the negotiations said remaining points of contention included whether Mugabe would retain the right to hire and fire ministers and how long a transitional  government would remain in place.

If the deal is agreed, it would also leave Tsvangirai working alongside a leader he has reviled as a brutal dictator, following months of attacks on opposition supporters blamed on soldiers and police working for the incumbent.

Elphas Mukonoweshuro, Tsvangirai’s foreign policy adviser, acknowledged in an interview on Saturday there was “a possibility of abuse” under the arrangements, but said regional leaders who were expected to endorse a deal could keep a check on Mugabe.

Thabo Mbeki, the South African president, who has been mediating the power-sharing talks, said a deal could be reached this weekend.

Tsvangirai came first out of four candidates in the first round of presidential voting in March, but failed to win by the margin necessary to avoid a runoff against second-place finisher Mugabe.

Tsvangirai withdrew from the June 27 runoff because of attacks on his supporters, blamed on Mugabe supporters and also security forces.

Mugabe, who is 84, was declared the winner, though the poll was widely criticised by observers. 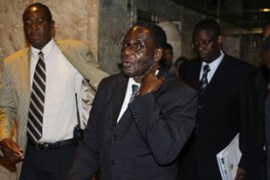 Deal to end Zimbabwe political stalemate expected to be signed at meeting.