“If he fails to decide to quit within the next two days, the impeachment process will take its course.”

Allies and rivals of Musharraf have said ongoing talks could lead to the president’s exit before an impeachment motion reaches parliament.

However, coalition officials said on Saturday that a draft of the impeachment charge sheet is awaiting approval from senior leaders.

Musharraf’s spokesman has said the president is not resigning, but whether he decides to quit could depend on what his rivals are willing to offer – in particular if they will give him legal immunity and let him stay in the country.

Separately, Condoleezza Rice, the US secretary of state, said on Sunday that the US was not currently considering granting asylum to Musharraf.

Speculation that Musharraf could be forced into exile heightened with the visit of Muqrin bin Abdul Aziz, Saudi Arabia’s intelligence chief.

Divisions have also appeared in the ruling coalition with respect to the treason allegations, raising the likelihood of impeachment proceedings.

Sadiqul Farooq, a spokesman for the Pakistan Muslim League-N (PML-N) , headed by Nawaz Sharif, a former prime minister, whom Musharraf ousted in a 1999 coup, said legal guarantees were out of the question.

Sharif’s party is the second largest in the coalition, and has said Musharraf should be tried for treason, which carries a maximum punishment of death.

“It will be in the interest of the country and the nation to make him an example in accordance with the constitution and the law,” Farooq said.

Sherry Rehman, the information minister, and a top PPP member, said that the party “never indulges in the politics of revenge as it wants a stable Pakistan and a sustainable democracy in the country”. 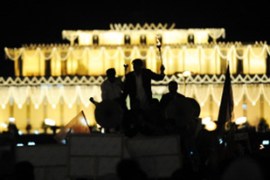 Musharraf aides ‘in talks to quit’