The case, one of a dozen against Thaksin, accuses him of using his political influence as prime minister to help his wife buy Bangkok real estate from the central bank at a bargain price, in contravention of laws against relatives of political leaders striking such deals.

The couple face up to 13 years in prison if convicted and because the case is before the supreme court, they would be unable to appeal.

Thaksin and Pojaman, his wife, are subject to an arrest warrant after failing to appear in court earlier this week.

Their flight into exile in London is almost certain to lead to a verdict being handed down in absentia.

Thailand has started the lengthy process of asking the UK to extradite Thakisn. Analysts warn the process could take years and that Thaksin might never be extradited.

The couple are now believed to live in a private estate near Weybridge, in south London. 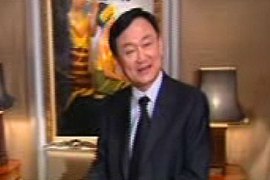 Video: Thaksin flees to the UK