A tense standoff has developed on the edge of Gori.  The Russians were expected to pull out and hand control back to the Georgians, but it appears the deal has been sunk by South Ossetian irregulars who demanded to control policing in the town.  This was unacceptable to the Georgian delegation handling negotiations and they’ve stormed out.

To try to talk their way into town, the Georgians dispatched their special forces but the Russians, fearing they were about to be attacked, moved their tanks up and for a few tense minutes both sides stared each other down with guns drawn.

Now at the edge of Gori stands five Russian tanks, their guns pointed at the Georgians just a few kilometres away.

As the press gather, suddenly a man in a uniform who has had too much to drink is carrying a gun. He’s ordering the journalists to leave the area, and when they don’t move fast enough, he fires two shots in the air.

It sends the press scattering, racing for their cars. Then to the side a number of explosions follow, far enough away not to be a danger, close enough to be a concern.

It’s a sign how close to the surface emotions are running.

And the poor people of this town, who hoped their agony was coming to an end, are caught up once more in a war they dind’t really want and now don’t fully understand.

Lili Lomsadse had just returned to her home not far from the centre when she heard the story of tanks in the town. For her, this was too much.

She didn’t even bother to change.

She packed a few things in a carrier bag and decided to run away again.

With a worried look across her face, she told me: “I just got back this morning, but I’m getting out. They told me the Russians are nearby and robbing people. Three tanks were in the town. I’ve got to go.”

We were filming at an apartment block when we heard the first shouts that the Russians were here.

Then came the slow, steady rumble of the heavy vehicles, and just beyond the trees, we saw them.

Packing up our gear we headed for the edge of town.

The few people left came racing out behind us.

Then from other nearby villages, others started to arrive where we had gathered.

They told stories of  masked men with guns stealing cars and valuables.

Old and frail Mariam Shulbatshvili was gasping for breath when she showed up.

She had come from the village of Karaleti but as she and her family were driving out they were waved down and ordered to stop.

“Men with guns stopped us and told to get out of the car. We offered them money but they said they wanted the car. We were very frightened. We lost everything: our documents, money, everything.”

Then without warning, it started. A sudden Russian advance, pushing out of Gori.

Travelling at steady speed, they were on the main road south towards the Georgian capital of Tbilisi.

If this was an invasion, it was slow and lacked agression.

The convoy snaked back for almost a kilometre.

As word spread to the surrounding villages that the Russians were coming, there was panic on the face of locals who piled in to every available vehicle to take them away from the advance.

On and on it pushed. Kilometre after kilometre, further into Georgian territory, challenging and provoking.

From the capital Tblisi, a convoy of Gorgian special forces soldiers was sent.

Suddenly it pulled to the side of the road 15km from the Russians and turned back to Tblisi.

Just outside the town of Orjasani, the Russians stopped.

The vehicles turned off the main road and took up positions in a field. We found out that the commander was awaiting further instructions.

Then from behind us came loud, worried voices and anguished tears.

A group of six women were distressed and angry.

They told us they had heard from relatives in the villages of Mejvriskhevi and Karaleti, and were rounding up the men and older boys.

“Khazacs and Ossetians in uniform are coming into the village, putting sacks over the heads of our men and slitting their throats. They’re taking everyone men, women and children. They’re dragging the attractive women away.”

There are reports of atrocities on both sides of this conflict. Al Jazeera cannot independently confirm the stories, but the women were distressed and adamant.

And then the Russians were on the move again.

The long line of vehicles snaking from their positions heading back to Gori and beyond. 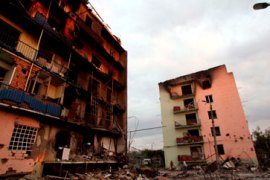 Al Jazeera’s Alan Fisher reports from the Georgian town as it comes under attack. 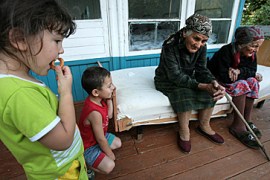