Turkey’s state-run news agency Anatolia said an army captain was among the dead.

Several F-16 fighter planes took off in the main southeastern city of Diyarbakir after the ambush but it was not clear where they were heading.

Erzincan province rarely witnesses separatist conflict but neighbouring Tunceli is the scene of frequent clashes between the PKK and Turkish armed forces.

On Thursday, the PKK claimed responsibility for an explosion last week in Erzincan which damaged the Baku-Tbilisi-Ceyhan oil pipeline and has said it would carry out more attacks on economic targets in Turkey.

However, military and local official sources have said the pipeline blast and subsequent fire were due to a technical fault and had not been caused by sabotage.

According to a senior source at BP, the British oil company, the fire in Erzincan was finally extinguished on Monday.

The PKK, regarded as a terrorist organisation by Turkey, the United States and European Union, took up arms against Turkey in 1984 with the aim of establishing a Kurdish homeland in the southeast of the country.

Some 40,000 people have been killed in the conflict. 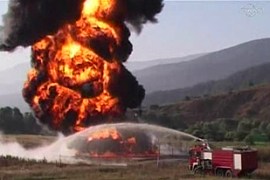 Blaze at strategic Baku-Tbilisi-Ceyhan pipeline in Turkey continues to rage.