At least 80 others were wounded in various parts of the state of Jammu and Kashmir, including  inside Srinagar, police, doctors and witnesses said.

Kuldeep Khuda, the state’s police chief, appealed to people “to help us in restoring peace” for the funeral.

“We have imposed curfew to ensure the peaceful burial of Sheikh Aziz,” he said.

“We are trying to ascertain what forced security personnel to open fire.”

Abdul Aziz, a fighter turned moderate political leader, was allegedly killed by Indian security personnel while marching on Monday in a protest near the Line of Control, which divides the Indian and Pakistani parts of the divided region.

Four other protesters were killed and more than 200 were injured in fierce clashes with police in the Kashmir valley.

The protesters said they were demonstrating against road blocks errected by Hindus in Jammu that have prevented lorries from reaching the Kashmir valley, damaging trade and blocking access to vital goods.

Abdul Aziz’s body was kept overnight in Srinagar’s Mughal-built Jamia Masjid, the biggest mosque in the region. Hundreds of mourners stayed with the body chanting, “We want freedom” and “Long live Sheikh  Aziz.”

The mourners have said they would not bury Aziz until two separatist leaders – Mirwaiz Umar Farooq and Syed Ali Geelani – were allowed to lead the funeral.

The two men are under house arrest.

Umar Farooq said: “This is the real face of Indian democracy”.

“For demanding lifting of an economic blockade we get bullets,” he said, “while Hindu fanatics who are attacking Muslims in Jammu and setting their property on fire are allowed to do whatever they want.”

The latest tensions stem from an order by the Jammu and Kashmir government in June to donate land to a Hindu pilgrimage trust in the valley.

The decision sparked a series of protests that left six people dead.

The land transfer was then cancelled, leading to riots in Jammu, where Hindus began blocking the only road access to the valley – a move that has badly hit Muslim traders.

The blockade has led to shortages of essentials, such as medicines, and prompted Monday’s protest march by about 100,000 Muslims to Pakistan so fruit growers and traders can sell their goods on the other side of the border. 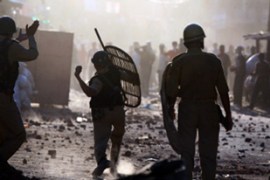 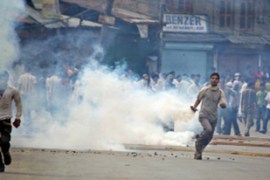 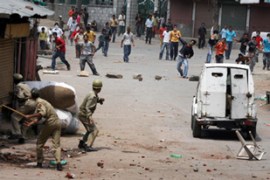