About 13 villages were still held by the separatists on Tuesday, but Eid Kabalu, a spokesman for them, said they were “repositioning” on Tuesday, but said the pace of the pullout depended on army troops ceasing fire.

“They’re repositioning to a place safe and far enough to prevent exchanges of gunfire from both sides,” Kabalu told The Associated Press.

The civil defence reported 159,123 people had fled their homes in 56 villages in the province, many of them to evacuation centres.

The violence is the worst seen since the Supreme Court halted plans to establish an extended Muslim homeland in the southern Philippines last week.

However, local officials in Mindanao opposed the agreement and filed a suit with the Supreme Court, leading to a suspension of the draft accord and raising new tensions.

The court has asked the government to submit arguments defending the agreement. 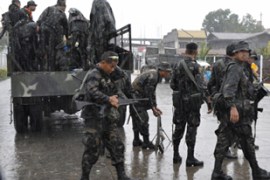