Phelps’ US teammate Peter Vanderkaay took bronze with a time of 1:45.14.

“I knew Park is strong in the last 50 meters,” Phelps said of the South Korean silver medalist, “so I knew I had to be fast and concentrated.”

With three events down, three gold medals and each of them setting new world records, Phelps has his sights set on beating US swimmer Mark Spitz’s 36-year-old record of seven golds in a single Olympics.

Phelp’s Beijing quest began with a world record in the 400 individual medley on Sunday, followed by a victory for the US team in Monday’s 4×100 free relay.

On Wednesday Phelps will go for his fourth Beijing medal in the 200m butterfly – another event in which he holds the world record.

One US television commentator has labelled Phelps “Tiger Woods in a Speedo”.

His competitions have helped draw huge audiences for the Olympics in the US, where broadcaster NBC said it had seen more viewers for any summer games held outside the US since 1976.

That will certainly be a relief for NBC executives who have spent $894m to aquire the broadcast rights for the games, deploying staff of several thousand to Beijing.

After a day of tumbling records on Monday, Tuesday saw more records broken in the Water Cube, with America’s Aaron Peirsol defending his 100m backstroke title with a world-record time of 52.54.

Teammate Matt Grevers took silver with a time of 53.11, while Russia’s Arkady Vyatchanin and Hayden Stoeckel of Australia tied for the bronze in 53.18.

In the women’s events US swimmer Natalie Coughlin won the 100 backstroke, with a time of 58.96 seconds – her second medal from the Beijing games. 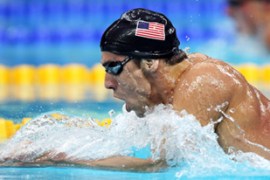