She added that Siddiqui had large stitches down her torso from major surgery and may be suffering from internal bleeding.

Elizabeth Fink, her chief lawyer, said: “She has been here, judge, for one week and she has not seen a doctor, even though they [US authorities] know she has been shot.”

Christopher LaVigne, a US prosecutor, told the court it was “a complicated situation”, and because of her alleged recent attack she was considered a “high-security risk”.

Siddiqui, a former US resident, was arrested on July 17 by police in Ghazni province in Afghanistan.

An interpreter pushed the rifle aside as she fired two shots, which missed, the prosecution said.

One of two shots fired by a soldier in response hit her in the torso and she was subdued.

Siddiqui’s lawyers have said they believe she was secretly detained since March 2003, when she left her parents’ home in Karachi to visit her uncle in Islamabad.

On Monday they said they could no longer discuss details of the case.

In 2004, she was accused by the FBI of being an “al-Qaeda operative and facilitator who posed a clear and present danger to America”.

Siddiqui was married to a nephew of Khalid Sheik Mohammed, who is accused of planning the attacks on New York and Washington in September 11, 2001.

Her husband was captured in 2003 and is now held at the US military prison camp at Guantanamo Bay, Cuba. 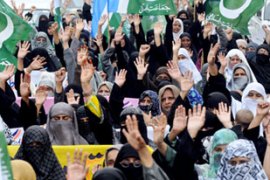 Officials extradite woman alleged to have shot at American agents while in custody.