“If we can’t reach substantive agreements … then we must address all those issues which divide us to a referendum – issues like re-election, the compatibility of autonomous governments, land issues.”

Morales has called on opposition governors who are defying his political programme to work with him.

But his victory in Sunday’s polls was tempered by strong gains for some of his political enemies, leaving the country sharply divided.

“It is very probable we won’t be able to find harmony between [regional] autonomy statutes and a new constitution,” said Quintana.

“That’s why we need a new referendum on the new constitution.”

The governors of the states of Santa Cruz, Tarija, Pando and Beni celebrated their own strong wins in the referendum.

Ruben Costas, governor of Santa Cruz, struck out in his speech against the president’s “dictatorship” and vowed Morales would not be able to set foot in his state.

Of the other four state governors whose jobs were also on the line in the referendum, three were seen to have been ousted – two of them Morales critics.

Manfred Reyes, of the central state of Cochabamba and one of the opposition leaders rejected in the referendum, has vowed to fight any attempt to make him stand down.

That raised the prospect of violence in his state, which was already shaken by clashes early last year between his supporters and Morales loyalists.

Morales relies on massive support among Bolivia’s indigenous majority, which accounts for six out of 10 of the country’s inhabitants.

They live mostly in the Andes to the west and have become increasingly assertive under Morales in their demands for a greater share of the national wealth.

But the elite, mostly of European descent, have much of the national wealth in the eastern lowlands in the form of farmland and gas fields. 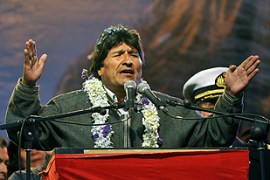