“It’s been quite clear in these three days of ongoing negotiations there are still substantive differences between the parties … and now the talks appear to have ground to a halt with Morgan Tsvangirai’s decision to leave the discussions.

“It’s not clear if this is a permanent withdrawal from the negotiations.”

The three Zimbabwean leaders have said little publicly about the details of their meetings and all refused comment as they arrived for Tuesday’s negotiations.

Pressure has been building for the political rivals to resolve the crisis, which intensified after Mugabe’s controversial re-election in June.

Thabo Mbeki, the South African president, has been mediating the Zimbabwe talks, but was due to fly home later on Tuesday.

“It’s unknowable when a deal will be reached but the president is due back from Zimbabwe later today,” Mbeki spokesman Mukoni Ratshitanga told AFP.

Earlier in the day Mugabe gave a speech in honour of the country’s army and, unlike in the past, avoided inflammatory comments about the opposition.

But he did, however, make a brief reference to international criticism of his regime.

“Since their formation, the Zimbabwe defence forces have remained steadfast in defending our national sovereignty, territorial integrity and interests as well as our hard-won independence,” Mugabe said.

“These sterling achievements have overcome numerous concerted efforts from some sections of the international community to destabilise our peace and stability and thus cause confusion in our country.”

Little about the negotiations has been released to the media, but the talks have reportedly included proposals for Mugabe to take on a more ceremonial role in exchange for amnesty from prosecution, with Tsvangirai being made executive prime minister.

But political analysts have suggested Mutambara could hold the key to the talks success.

Members of the former robotics professor’s MDC faction could bolster either Mugabe’s Zanu-PF party or Tsvangirai’s main MDC party in the lower house of parliament. 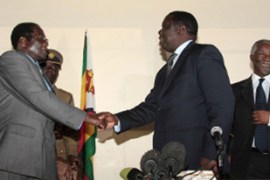 Talks between Zanu-PF and the opposition on power-sharing deal to continue.