An amendment sought by South Africa and Libya on behalf of the African Union (AU) was not included in the final draft, which instead includes compromise language taking note of a July 21 AU communique that raised concern that any indictment of al-Bashir might jeopardise the Darfur peace process.

That statement had asked the security council to defer for at least one year any prosecution of al-Bashir as requested by Luis Moreno-Ocampo, the ICC’s chief prosecutor.

The US, like Sudan, is not a member of the ICC and does not recognise its authority and Washington has refused to sign up because of sovereignty issues, among other objections.

But that did not stop the US delegation from fighting to remove other members’ objections to the ICC’s possible indictment of al-Bashir.

“The language on the ICC sends the wrong signal to a man who presided over genocide,” Richard Grenell, a spokesman for the US mission to the UN, said before the vote, referring to al-Bashir.

The vote was postponed for several hours as council diplomats worked to persuade the Americans to vote yes instead of abstaining.

Had the Americans used their veto power to kill the resolution, they would have jeopardised the entire peacekeeping mission.

Diplomats on the council said they wanted the vote to be unanimous to show that the council was undivided in support of peacekeepers in the line of fire.

Nearly half the 15-member council had made a reference to the international court in the text a condition of renewing the peacekeeping mandate.

Despite the accommodation to South Africa, Libya, Russia, China and four other council members, however, a Western diplomat described the resolution as a “wake-up call” to the world to finally end the Darfur crisis.

John Sawers, Britain’s ambassador to the UN, conceded that the hard-nosed haggling over the draft language had been complicated by Moreno-Ocampo’s request for al-Bashir’s arrest.

He noted that a number of council members wanted a reference to a call for a deferral of any prosecution of al-Bashir for at least one year so as not to jeopardise the Darfur peace process.

But he stressed the final draft made no mention of that.

“It is likely that we will discuss this [the deferral request] again over the coming months,” Sawers said. “But the focus now should be on renewing the UNAMID mandate and showing solid council support for what is a very different mission in the field.”

The draft merely cites concerns raised by some council members “regarding potential developments subsequent to” Moreno-Ocampo’s arrest request and takes “note of their intention to consider these matters further”.

Sudan threatened last Friday to expel peacekeepers from Darfur if al-Bashir is indicted but Abdalmahmoud Abdalhaleem, its ambassador to the UN, said on Wednesday that the text of the statement was “acceptable” to his government.

The resolution expresses the council’s deep concern at the insecurity and the killing of aid workers.

It also demands an end to all attacks on civilians “including by aerial bombing”.

Five years of war have brought humanitarian disaster to the western Sudanese region and Darfur campaigners accuse the world of failing to provide helicopters and other badly needed support for the struggling peacekeeping mission there.

The United Nations says that up to 300,000 people have died and more than 2.2 million have fled their homes since the conflict in Darfur erupted in February 2003. Sudan says 10,000 have been killed.

The UN-African Union peacekeeping force, known as Unamid, has been struggling to stabilise the situation, but has only deployed some 9,500 troops and police out of a planned force of 26,000, due to both Khartoum’s demands and UN bureaucracy.

The UN Security Council resolution calls on member states to provide the helicopters and everything else Unamid needs.

The UN hopes to have 80 per cent of the mission deployed by year-end. The resolution urges both the UN and Sudan to do everything possible to make Unamid fully functional.

Twenty-two more men convicted of involvement in May 10 Omdurman raid. 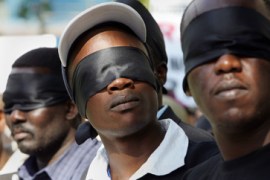 Arab editors respond to criticisms and assess western media coverage of the crisis. 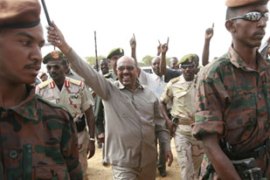 Refuses to guarantee “wellbeing” of foreign troops in Darfur if president is indicted.