Prikhodko said the talks had been “exclusively well-intentioned, constructive and open, but at times critical”.

He said Medvedev believed “the overall balance of Russian-American relations is without a doubt positive”.

In addition to meeting with Bush, the Russian president held separate talks with the leaders of Germany, France and Britain at the summit in the lakeside town of Toyako.

“I found him to be a smart guy who understood the issues very well,” Bush said of Medvedev.

“But I’m not surprised. After all, he has been very close to foreign policy issues up until his ascendancy to the presidency.”

Medvedev will be scrutinised for any signs of a break with Vladimir Putin’s, his predecessor as president, assertive foreign policy and often confrontational conduct on the world stage.

So far, Kremlin-watchers have discerned mostly differences in style rather than substance in comparing the two men’s policies.

Medvedev himself told journalists from the G8 countries last week “the accents in both domestic and foreign policy will doubtless change” but the differences would be mere “stylistic shading”.

He has stressed, however, that in practice he would protect Russia’s interests no less fiercely than Putin did.

In additon to criticising the US over its missile defence plan, Medvedev has echoed Putin in his anger at Nato’s promise to eventually invite Georgia and Ukraine to join the military alliance.

“This for us remains a red line for the development of relations with the alliance and with the United States,” Medvedev’s press office said on Sunday.

Prikhodko said that Medvedev had told Gordon Brown, the British prime minister, on Monday that he wanted to normalise tense ties between the nations.

He said: “President Medvedev suggested that the two countries focus on returning bilateral relations to a normal state, to the level of a few years ago.”

Relations between the two countries soured after Alexander Litvinenko, a former KGB agent turned dissident, died in a London hospital in November 2006 due to extreme radiation poisoning.

Russia refuses to extradite Andrei Lugovoi, a former KGB agent, the only suspect in a case that has attracted global attention and brought British-Russian relations to a post-Cold War low.

Brown had said before the meeting that he would raise all “outstanding issues” between the two countries during his first face-to-face meeting with Medvedev.

Russia’s ties with Germany and France are less acrimonious.

Medvedev has already met with Merkel since his inauguration, making Germany his first West European destination.

Sarkozy promised that France would do its best to promote the swift development of a new wide-ranging pact between Russia and the European Union.

However, Sarkozy seemed to suggest that Russia could put more pressure on Iran over its nuclear programme and do more about the crisis in Darfur.

“It’s in the interest of the stability of the whole world for Russia to play a full role in resolving major crises.

“We need a Russia that’s fully engaged in international affairs to guarantee peace and stability.” 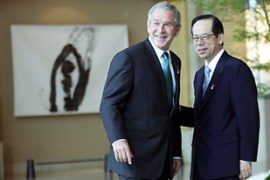 Russia, US to curb portable missiles

Russia and the United States have signed a deal to control the spread of portable anti-aircraft missiles – a hot stock for anti-government armed groups around the world and a growing threat to civilian aircraft.

Moscow and Washington intend to remain strategic partners despite their dispute over the US-led war against Iraq, Russian President, Vladimir Putin said on Sunday.

Russia: US neither friend nor foe

Russia and the United States are neither allies nor enemies, Russian Defence Minister Sergei Ivanov has said.