Al Jazeera’s Kamal Hyder said that the devices used on Monday were “amateur” and had been planted in Pashtun dominated areas.

Babar Khattak, the provincial police chief, said the 150g-200g bombs may have been intended to provoke ethnic unrest.

“It seems the series of blasts was carried out to create harassment and fear among the citizens,” he said.

The bombs had been hidden in motorcycles, bicycles and auto-rickshaws.

The police said five men had been detained. There has been no claim of responsibility. 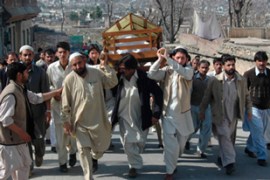