“Today is a new start in the history of exchanges between the two sides,” Wang Yi, director of China’s Taiwan Affairs Office, said on Friday in Beijing before the departure of an Air China flight bound for Taiwan.

“At present, cross-strait relations are facing a rare opportunity for development,” he said.

Liu Shaoyun, the president of China’s Southern Airlines, who piloted the Airbus A330 aircraft from Guangzhou, said the planned regular commercial flights would “replace the rumbling warplanes over the skies of the Taiwan Strait, and relations between the two sides will become better and better”.

No regular flights, aside from a few charters had flown between the two sides since 1949, when defeated Nationalist forces fled to Taiwan after the Chinese civil war.

The resumed flights are largely the work of Ma Ying-jeou, Taiwan’s  president, who took office in May on pledges to revitalise the island’s economy with closer trade and transport ties to China.

The two sides entered negotiations in June on improving economic ties and lifting travel restrictions, following a visit by Taiwan’s ruling party leaders to Beijing in May.

The flights represent the first of a step-by-step approach to improve ties but trickier issues remain, such as a formal peace treaty and the hundreds of weapons each side has aimed at the other.

China claims sovereignty over self-ruled Taiwan and has vowed to bring the island under its rule, by force if necessary.

For the moment, though, both sides are keen to capitalise on the goodwill generated by the flights.

At Taipei’s Songshan airport, passengers on the first flight were greeted by a welcoming ceremony complete with dragon dancers.

“It’s so convenient to get here. Since I was very young I always wanted to go to Alishan,” said Wang Qi, a 40-year-old Chinese tourist on the Xiamen flight, referring to Taiwan’s most famous mountain.

“So today I feel very happy and warm.”

To cash in on the expected tourism boom, local authorities have spruced up sightseeing spots such as Alishan and the Sun Moon Lake.

The flights were not without some controversy, however, as a group of about a dozen Tibet independence activists shouting “welcome to free Taiwan” held a protest over Beijing’s recent crackdown in Tibetan regions of China.

Followers of Falun Gong, a group banned by Beijing as an “evil cult”, have ignored requests by the Tainan municipal government in southern Taiwan to stay away from several popular tourist sites.

Taiwanese officials have vowed to prevent any confrontations between the visitors and any anti-China activists.

“If the mainlanders have any grievances or are involved in any disputes, we will have an emergency task force to deal with them,” said Hau Lung-bin, the mayor of Taipei.

Taiwan hopes the Friday to Monday commercial service will be extended to weekdays in coming months, with an aim of attracting 1 million Chinese tourists a year, up from just 80,000 last year, officials say.

The flights will ply between Taiwan and the Chinese cities of Beijing, Guangzhou, Nanjing, Shanghai and Xiamen, allowing as many as 3,000 Chinese tourists a day to visit the island, which previously viewed them as a security risk.

The 36 round trips per week will eliminate time-consuming Hong Kong or Macau stopovers for Taiwanese, about 1 million of whom live on the mainland.

But they will still fly a roundabout route through Hong Kong air space for security reasons. 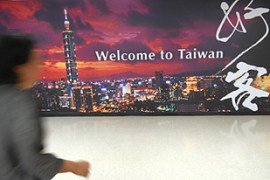 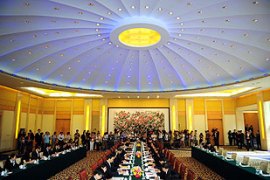 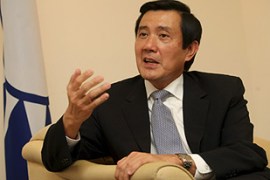 Taiwan says it will restart direct talks with Beijing after more than a decade.