He also said that it is reasonable to expect “further reductions in our combat forces, as conditions permit”.

Bush was eager to highlight supposed progress but said that the situation was still precarious.

“We remain a nation at war,” he said.

“The terrorists remain dangerous and they are determined to strike our country and our allies again.”

Meanwhile, on the ground, Iraqi security forces carried out dozens of arrests on the third day of a major military offensive in the province of Diyala.

Up to 155 people were detained on Thursday, in an operation targeting al-Qaeda in Iraq and other armed groups.

Thousands of soldiers set up extra police checkpoints around Baquba, the provincial capital, to prevent non-residents from entering or leaving the area, as house-to-house search operations got under way inside the city.

The offensive is being run by Iraq’s military, with backing from US troops.

Iraqi forces also arrested 12 policemen on suspicion of collaborating with the fighters near Baquba, police said.

The US military said earlier this month that a force of 30,000 Iraqi soldiers and police would take part in the offensive, although of local official has said nearly 50,000 personnel are involved in the US-backed operation.

Ibrahim Bajilan, the head of the regional council, told The Associated Press news agency on Wednesday that the crackdown would last for about two weeks and then “law will be imposed in all Diyala”.

Diyala, which has a long border with Iran, has been a centre of weapon smuggling, has suffered repeated suicide bombings, and controls key supply routes to Baghdad and the northern cities.

Brigadier-General David Perkins, a US military spokesman, said the main challenges in Diyala were the hot summer temperatures and the abundance of hiding places and enclaves in palm groves and other agricultural areas.

In other news from Iraq, Kurdish politicians have called for the disputed city of Kirkuk to become part of the Kurdistan region, a move that could raise tensions with the city’s Arab and ethnic Turkmen communities.

The call was made at a provincial council session on Thursday boycotted by Arab and Turkmen members.

It followed several days of street protests by Kurds against a local election law that would delay voting in the oil-rich northern city in future local polls.

Kurds regard multi-ethnic Kirkuk, which lies just outside the largely autonomous region of Kurdistan, as their ancient capital.

Arabs and ethnic Turkmen want Kirkuk to stay under the control of the central government. 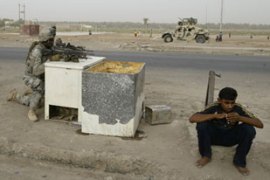