“The entire nation, including major metro cities in India, have been put on high alert and they have been asked to step up security in vital installations,” a home ministry spokesman said.

An e-mail sent to several television stations just minutes before the attacks in Ahmedabad said: “In the name of Allah the Indian Mujahidin strike again! Do whatever you can, within 5 minutes from now, feel the terror of death!”

The subject of the e-mail read: “Await 5 minutes for the revenge of Gujarat”, an apparent reference to riots in the western state in 2002 which left at least 1,000 people, mostly Muslims, dead.

Shakeel Ahmed, India’s minister of state for home affairs and spokesperson for the Congress party, told Al Jazeera: “We have heard of the Indian Mujahidin in an earlier blast but nobody confirmed whether this organisation exists or if it’s a cover up for any other organisation which is creating trouble in India.”

Saturday’s attack followed a series of blasts in the southern city of Banglaore on Friday, which killed at least two people. The e-mail warning did not claim responsibility for those bombings.

Another unexploded bomb was found and defused early on Sunday in Ahmedabad, said O P Mathur, the city’s police commissioner.

He said police had detained 30 people in their investigation.

In Surat, a city about 255km south of Ahmadabad, investigators found a car carrying detonators and a liquid that police suspect may be ammonium nitrate, a chemical often used in explosive devices, R M S Brar, the city police chief, said.

Most of the first wave of blasts took place in the narrow lanes of the older part of Ahmedabad, which is tightly packed with homes and small businesses.

Police said that the first explosion was reported at around 6pm local time (12:30 GMT) on a bridge which saw bloody clashes between Hindus and Muslims in 2002.

Many of the bombs were placed in busy areas of the city, including a railway station and a diamond market. Some devices were attached to bicycles, while one appeared to have been detonated on a bus.

A second wave of explosions went off outside hospitals shortly after the first series of blasts.

“I came with my two children to cheer up my mother admitted to hospital,” said Pankaj Patel, whose son Rohan and daughter Pratha were killed at Ahmedadad hospital.

“They were laughing when the blast occurred. Now they are dead.”

Officials and medical staff said that many of the injured had been hit by flying nuts, bolts and ball bearings packed into the bombs.

Al Jazeera’s Todd Baer, reporting from Ahmedabad, said that locals had reacted with “shock, sadness and, quite frankly, utter despair”.

“I met a couple of people today who lost family members in these bomb attacks and its very difficult to describe the heartbreak and the look in their eyes,” he said.

Narendra Modi, the chief minister of Gujarat state, said: “The land of Mahatma Gandhi has been bloodied by terrorists whom we shall not spare.”

Sriprakash Jaiswal, a junior home minister, was critical that the attacks had come despite security being heightened after the Bangalore blasts.

“This is very unfortunate and we are surprised that despite a high security alert sounded yesterday after the bomb attacks in Bangalore, the blasts occurred today in Ahmedabad. We are shocked,” he told reporters in New Delhi.

“It seems there is a lack of co-ordination between [federal] intelligence agencies and people involved in the policing.”

Muslim groups in Pakistan and Bangladesh have been blamed for previous attacks in India.

Retired Commodore Uday Bhaskar, former head of the Institute for Defence Studies and Analysis, told Al Jazeera that the manner in which the attacks were carried out suggested “a certain degree of support” from outside the country.

“They are putting the Indian state on guard, that is the disturbing part,” he said.

“Is this the beginning of a certain radicalisation of a small minority within India that believes that this is the only way out for them, to recourse to terror and violence.” 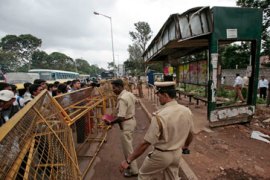 Major attacks in India since 2001

A chronology of bombings and attacks over the last seven years in India. 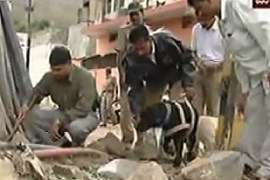 Bangalore hit by series of blasts

A number of explosions have struck India’s IT capital killing one and injuring many more.

More than 180 dead in Mumbai blasts

More than 180 people have been killed in the coordinated blasts on commuter trains in Mumbai, India’s financial centre.