The paramilitaries have been condemned by human rights groups for the killings of trade unionists and political activists and their involvement in the drug trade.

In May, Uribe extradited 14 senior paramilitary leaders to stand trial in the United States on drug trafficking charges.

“The accusation against the senator is that he used paramilitaries to help win elections and consolidate power in his home province of Tolima,” a spokesman for Colombia’s attorney general’s office told the Reuters news agency.

Garcia is the second senior member of a party closely tied to Uribe to be arrested in the so-called parapolitics scandal.

In April, authorities arrested Mario Uribe, a former senator, second cousin and confidante of the president, over his alleged links to paramilitary groups.

Garcia had been promoting efforts to allow Uribe to run for a third term in 2010.

Uribe, the United States’ closest ally in Latin America, is leaving open the option of running again in 2010, and polls suggest he will win with ease.

But Colombia’s scandal-hit congress will first need to approve a referendum vote on whether to amend the constitution to allow him to seek an unprecedented third term.

The law has already been changed once to allow his 2006 re-election. 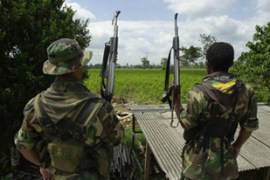 President’s allies accused of reaping benefits from links to paramilitaries.