“So we do not have any basis to form the next government.”

However, he said that the the Maoists were still open to talks with other parties.

The Maoists could have formed the first government since the end of a 240-year old Hindu monarchy in May.

Subina Shrestha, Al Jazeera’s correspondent in Kathmandu, said that the vote could have “really dangerous consequences for the peace process and the politics of consensus”.

She said that the “threatening” approach adopted by the Maoists had previously led the Nepali government to “give in to almost all of their demands”.

However, this approach did not work in the presidential vote.

Ramraja Prasad Singh, backed by the Maoists, was defeated in the constitutional assembly by Ram Baran Yadav, an ethnic Madheshi from the centrist Nepali Congress party, on Monday.

The result indicated opposition parties voting against the Maoists, who won the most seats in parliamentary elections in April but not enough to gain an outright majority.

The Maoists had insisted on their own choice of president being appointed before they formed a new government.

The country has been stuck in political limbo since the assembly sacked King Gyanendra in a meeting on May 28.

The Maoists’ presence in government is seen as key to the nation’s peace process, which put an end to a 10-year civil war in the country.

Al Jazeera’s Shrestha said that the Maoists will in all likelihood eventually participate in the creation of a new constitution and preserve the peace deal. 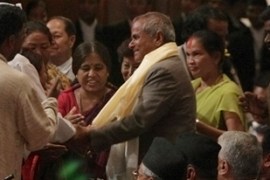 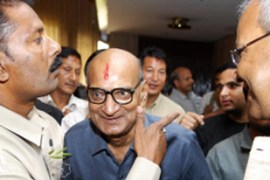 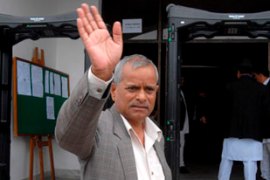 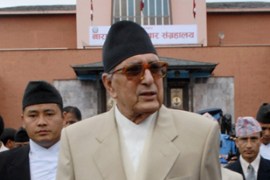