The clarification on Tuesday comes a day after Singapore’s foreign minister quoted Nyan Win as hinting that Aung San Suu Kyi could be released within six months.

George Yeo said on Monday that Myanmar’s foreign minister had told him that according to law a political detainee could be held for a maximum of six years, and that the limit was approaching in about “half a year’s time”.

The remarks were widely reported as offering a new glimmer of hope for Aung San Suu Kyi’s early freedom.

But on Tuesday Singapore’s Straits Times newspaper quoted Yeo as saying that the six-year period will only be reached in the six months after May 2009, when her latest one-year detention period expires.

The newspaper quoted Yeo as saying that Asean ministers had “misunderstood” Nyan Win.

The Nobel peace laureate has been held under house arrest or in Yangon’s notorious Insein jail for most of the past 18 years.

In a rare move on Monday the 10-nation Asean grouping issued a strong rebuke to Myanmar at the opening of a four-day annual security summit expressing “deep disappointment” at Aung San Suu Kyi’s continued arrest.

Asean has traditionally had a policy of not commenting on the internal affairs of member states.

The joint statement also urged Myanmar’s rulers to engage in a “meaningful dialogue with all political groups and work toward a peaceful transition to democracy in the near future”.

Asean has faced international criticism, especially from the West, for not putting enough pressure on Myanmar’s rulers to move toward democracy and free political prisoners. 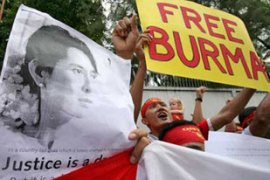 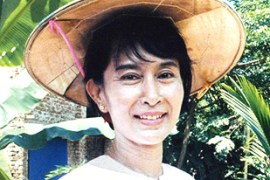 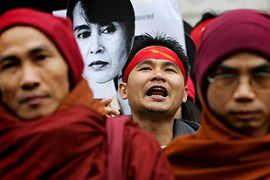