Rula Amin, Al Jazeera’s correspondent reporting from Shatila, said: “Some of the bodies that are being buried are of people that had been killed from over 20 years ago, and for many families, wounds have been reopened.”

Several bodies delivered in the prisoner swap were placed in the same casket, making it difficult for families to identify the bones of their dead relatives.

Amin reported that the condition of the bodies had been causing a lot of resentment among the families.

“Family members we spoke to feel that Israel did this on purpose in order to diminish the kind of success Hezbollah achieved by bringing the bodies back,” she reported.

In Damascus, the Syrian capital, 90 other bodies will be delivered to families living in refugee camps there.

The bodies are of fighters from a number of nationalities, including Kuwaitis, Moroccans, Tunisians and Libyans who had joined the ranks of Palestinian and Lebanese national movements in the 1970s to protest against Israeli occupation in Palestine.

All were killed in combat while confronting the Israeli army.

“That’s why the prisoner swap triggered debate in Lebanon, Syria and Palestine over how a small Lebanese organisation like Hezbollah managed to bring back the bodies successfully while attempts by other Palestinian national movements had always failed,” Amin said. 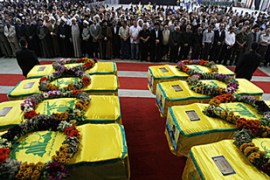 Service held after the return of the bodies of eight men killed fighting Israel. 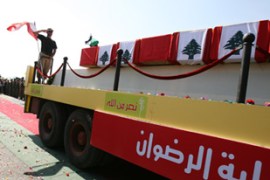 Dead Lebanese fighters are sent to Beirut while funeral is held for Israeli soldier. 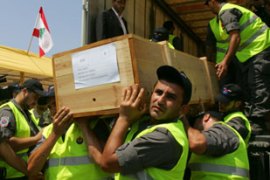 Five men handed over to Hezbollah movement, hours after remains of two Israeli soldiers were returned.