“Iran is calling on the Western powers to resume the dialogue,” he said.

But the Iranian negotiator also confirmed that Tehran would not enter into any discussion about freezing Iran’s uranium enrichment programme, which the US has said would be essential for real negotaitions to take place.

Nazanine Moshiri, Al Jazeera’s correspondent reporting from Geneva, said: “There was a lot of politeness from both sides but nothing substantial.”

The presence of William Burns, the number three official at the US state department, at the talks had cast the negotiations in a positive light.

His attendance marked the first time in almost 30 years that senior US and Iranian diplomats had met face-to-face and was widely seen as a major policy shift by Washington, which has not had any diplomatic relations with Iran since the Islamic Revolution.

“It’s up to him to choose his attitude,” Christina Gallach, Solana’s spokeswoman, said.

But she added that his presence was a “strong signal of the US support for a negotiated solution”.

Following the talks, Washington insisted that Tehran give up its nuclear ambitions.

“We hope the Iranian people understand that their leaders need to make a choice between co-operation, which would bring benefits to all, and confrontation, which can only lead to further isolation,” Sean McCormack, a state department spokesman, said.

McCormack confirmed Burns did not hold separate talks with any of the Iranian delegation to the talks.

Richard Murphy, the former assistant US secretary of state, told Al Jazeera that the meeting in Geneva showed the US was ready to “bend, and not to break” its principles of “no negotiations” before Iran suspended enrichment.

“The Europeans have asked Iran to suspend enrichment for a limited period – a ‘freeze for freeze’ – where, at the same time, the West would suspend further sanctions at the UN”.

Murphy said there was now a two-week deadline for an agreement to be reached, which required “care and patience from both sides”.

The talks, as well as Iranian comments playing down the chances of an attack by the US and Israel, had helped slightly to ease tensions, after they were heightened by an Iranian missile test last week.

Enrichment is considered a key issue as it can produce either fuel for nuclear power stations or the material used in the fissile core of warheads.

Iran has already defied three sets of UN sanctions demanding it cease its nuclear programme, saying it has a right to its peaceful uses under the nuclear non-proliferation treaty.

The incentives package offered to Iran is a revised version of a 2006 offer which includes civilian nuclear co-operation as well as greater trade in aircraft, energy, technology and agriculture.

There is growing concern that Iran might try to build nuclear weapons instead, something Iran has repeatedly denied. 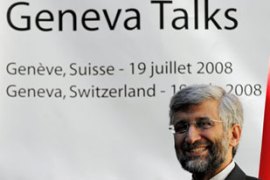