In return, the bodies of almost 200 people were received by Hezbollah, including the body of Dalal al-Maghrebi, a female fighter with the Palestinian Fatah movement.

As well as handing over the bodies to Hezbollah, Israel has agreed to hand over five Lebanese prisoners including Samir Kuntar, convicted of murder and the longest held Lebanese prisoner in Israel.

“The Israeli cabinet agonised over it [the exchange] and voted in favour of it against the advice of the Israeli intelligence service … which thinks it will only encourage kidnappings,” David Chater, Al Jazeera’s correspondent in Israel, said.

“But the bulk of Israeli public opinion is behind this deal,” he said, reporting from Rosh Hanikra – the Israeli side of the border – where he said there was a strong military presence ahead of the exchange.

While the scene was sombre in Israel, in Lebanon’s Hezbollah-dominated south there was a mood of celebration.

Yellow Hezbollah flags lined the streets in towns and villages across southern Lebanon, as well as along the coastal highway from Naqura to Beirut, the capital.

Hezbollah has dubbed the exchange Operation Radwan, in honour of Imad Moughniyah, known as “Hajj Radwan”, the group’s military commander who was assassinated in Syria in February.

“It’s regarded as being the final chapter of the 2006 war,” journalist Robert Fisk, a Middle East expert, told Al Jazeera.

Lebanon has declared a national holiday to celebrate the prisoner swap.

“This is a big day because it’s the day we [Lebanon] have the liberation of four or five heroes,” Wassim Manssouri, a professor in constitutional law at Beirut’s Lebanese University, told Al Jazeera from the capital.

Celebrations were also under way in Ramallah, in the occupied West Bank.

“The exchange is seen as a victory for Arab resistance,” Nour Odeh, Al Jazeera’s correspondent, in the West Bank, said.

Kuntar is a member of Lebanon’s Druze population.

Walid Jumblatt, Lebanon’s Druze leader, told Al Jazeera: “My father was the founder of a Lebanese-Palestinian coalition to fight Israel and recover the Palestinians’ rights. My father would be happy.”

“I am happy [too], but we should not forget the Palestinians who are detained in their own land,” he said.

The Hezbollah exchange has prompted the public in Arab countries such as Jordan and Egypt – which have both signed peace deals with Israel – to question why their governments have not been able to repatriate the bodies of their soldiers. 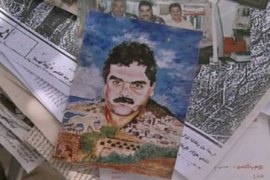