Jorge del Castillo, a cabinet member, told reporters that a government office was also set fire to in Puerto Maldonado.

The protesters have been angered by rising fuel and food prices which they blame on Garcia’s free market policies.

About 6,000 people marched on Lima, the capital, and held a pot banging session in a central plaza.

Transport workers did not strike but demonstrators tried to block roads in many areas.

The army was deployed to protect airports and water and power plants.

The strike was organised by the General Confederation of Workers. The union called the strike “successful on the national level”.

The government said the strike failed to meet the union’s expectations, but Garcia acknowledged that there is “dissatisfaction in a large section of the Peruvian society”.

“I salute those who protested peacefully and those who worked taking their protest in their minds,” he said.

Mario Huaman, the secretary-general of the General Confederation of Workers, said that the “incessant rise of the cost of living” and the country’s “neo-liberal economic policy that hurts the interests of the impoverished” meant that the government had to increase wages.

Peru’s economy has achieved impressive growth since Garcia became president in 2006, reaching 9 per cent in 2007.

However, the Andes mountain and jungle regions of the country feel neglected by this growth which they feel has primarily benefitted Lima and coastal areas. 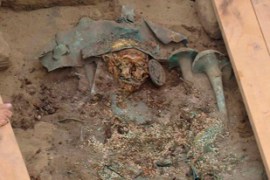