Daoud Mousa, the victim’s father and an Iraqi police colonel, praised the resolution of the long-standing dispute.

“The death of my son is with me every day of my life,” he said.

“Today’s settlement will ease a little of that pain and will go some way to enabling his children and my grandchildren to rebuild their lives.”

Martyn Day, the senior lawyer handling the case, said the settlement was welcome after years of legal proceedings stemming from the events in Basra.

“We are very pleased that we have been able to reach this settlement,” he said.

“Our clients have been through hell over the last few years and this settlement will go some way to enabling our clients to have some semblance of a decent future life.”

Leigh Day & Co, the law firm which represented the men, said that British officials apologised during the mediation proceedings, but ministry of defence officials would not immediately confirm or deny that. 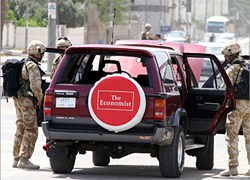